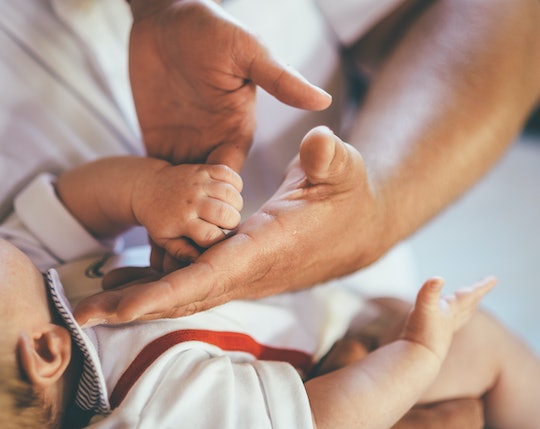 Babies Miss Their Mom, But What About Dad?

From birth, moms are encouraged to spend as much time with their baby as possible, but what about the other parent? Do babies miss dad when he’s not there? In a word, yes.

"Infants are very good at differentiating their mother's face from another female face as young as 2 days old (i.e., they look longer at mom's face than the stranger's face), but do not show this differentiation of their father's and another male's face at this age or even at 4 months of age," she says. "Interestingly, however, the 4-month-olds showed more positive affect when looking at their father's face than the stranger's face, suggesting some recognition, albeit different from how they responded to mother's face."

Babies start to realize that people continue to exist even when they're out of sight — also called "object permanence" — between 4-7 months of age, according to Kid's Health. But at this age a baby doesn't understand the concept of time. So they know mom and/or dad still exist when they're not around, but because they don't know how long mom and/or dad have been gone they can grow anxious, fearing their parent won't return.

A parent's gender doesn't automatically dictate the type of bond they'll have with their child. So, just like moms, dads can and do bond with their babies. "Secure bonds develop when fathers show sensitivity in their caregiving," Rennels says. "Meaning they are responsive to how their infant is feeling." In other words, when a father feeds his hungry baby, soothes his crying baby, plays with his happy baby, and helps his tired baby go to sleep — you know, parenting — he is bonding with his baby.

"[A baby] will respond to dad’s touch, smell, [and] presence," Dr. David Rosenberg, M.D., Professor and Chair Department of Psychiatry Wayne State University and the Detroit Medical Center, tells Romper. "And the attachment begins to get hardwired with lifelong implications." (A 2016 study published in the London Journal of Primary care found that children who don't develop a bond with their parents and/or caregivers in infancy are less likely to become happy, resilient, and independent adults.) Rosenberg says dads can also bond with their babies via singing, touching, and laughing, and the more time they spend with their babies the quicker and stronger the bond they share will be.

While it's rare that separation anxiety commonly occurs once your child passes their preschool years, according to the American Academy of Pediatrics (AAP), it can be difficult for parents and children to endure. Thankfully, there are things parents, regardless of their gender, can do to help their children cope.

"If a parent is leaving their baby/toddler with a new person, it is good to spend some time together with them to help the child feel comfortable with that individual," Rennels says. "When that is established, the parent can hopefully leave without their child showing much anxiety. When toddlers develop some verbal abilities, parents can also convey where they are going and when they will be back to assure the child of when they will see them again."

Other ways to help soothe your child's anxiety, according to the AAP, include establishing quick and easy goodbye rituals, giving your child your full attention, keeping your promises (i.e. when you'll be returning), and practicing spending time apart by scheduling playdates and leaving your child with grandma and grandpa.

If "absence makes the heart grow fonder," than a typical amount of separation anxiety is often the sign of a healthy parent-child bond. And, just like moms, dads can facilitate and create that bond by being consistently engaged, loving parents.

More Like This
There’s A Reason Your Baby Always Falls Asleep While Breastfeeding
Experts Explain Whether It’s Safe For Your Baby To Sleep On Your Chest
Parent's Guide To A Baby's Dry Cough: Why They Happen & How To Treat
Can You Breastfeed After A Breast Lift? Experts Explain

This article was originally published on Sep. 20, 2019