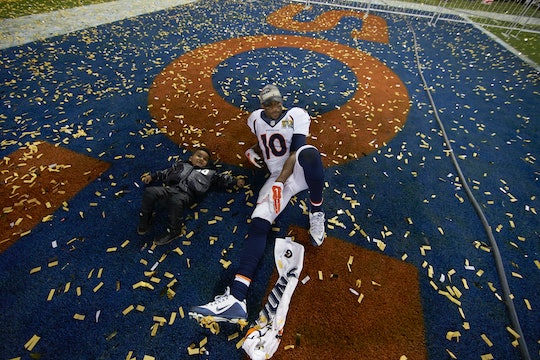 Although a relatively new addition to the San Francisco 49ers, Emmanuel Sanders has quickly become a favorite with fans. And although the wide receiver maintains a certain grit and toughness on the field — something we're sure to see at the Super Bowl — he reveals a softer side when with family. Sanders has two children with wife Gabriella Waheed, and both are too adorable for words.

Even the most cursory of glances at Sanders' Instagram makes it clear that this NFL star is head over heels for his two kids. Between photographs of himself breaking a sweat on the field and sporting the latest fashions on the street, are pictures and videos of his two children. The 32-year-old San Francisco 49ers wide receiver welcomed his second child, a daughter named Zoie, with Waheed in December 2016, according to ABC News affiliate The Denver Channel. Their first child, a son named Princeton, was born in 2014 and is already an adorable pint-sized Instagram influencer at the age of 5.

Since their births, Sanders hasn't been shy about sharing his love for his children or his goals as a parent. "I hope I leave an impression on my kids to have blessings they believe in," Sanders once wrote on Instagram alongside pictures of himself taking time to stop and hug his son on the sidelines of a game.

What's more, the wide receiver, who is himself an accomplished athlete, takes time to celebrate his children's achievements on his social media. In May, for example, he shared family photos from Princeton's pre-K graduation. "My son graduated pre K today," Sanders wrote on Instagram. "He said he’s going to miss the warm cookies and milk but not the mandatory naps."

Then in August, he jokingly shared another update on Princeton alongside photographs of his young son training with professional NFL players. "My 5-year-old son @princetonsanders signed a 2yr 200 million dollar contract today with the San Francisco 49ers after beating @marquisegoodwin in the 40-yard dash (swipe right) and making @rsherman25 fall when he tried to jam him at the line of scrimmage," Sanders wrote. "Congrats son. Proud of you."

While Sanders and Waheed's relationship reportedly experienced major turbulence a few years ago — TMZ reported Waheed filed for divorce and a restraining order while pregnant in 2016 — they appear to have patched things up. In an Instagram post from May, Sanders called Waheed an "incredible mother," noting that he loved and appreciated her "tremendously."

Sunday marks the third Super Bowl for Sanders, who was traded to the San Francisco 49ers in October. He's previously gone to the Super Bowl with the Steelers in 2010 and the Broncos in 2015. And on Sunday night, Zoie and Princeton will surely be cheering for their dad.