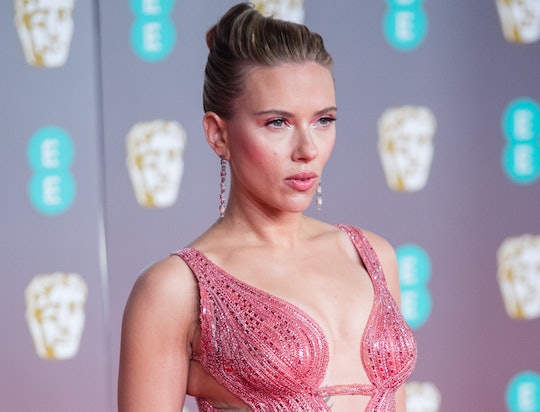 She plays a mom with a guilty conscience so well that she has been nominated for Best Actress for her role in Jojo Rabbit. But was any of that on-screen mom guilt inspired by real life? Or more specifically, does Scarlett Johansson have kids? The Oscar-nominated star is also a proud mom IRL. Although she doesn't speak openly about motherhood too often, Johansson has a 6-year-old.

Johansson shares daughter Rose Dorothy Dauriac with ex-husband Romain Dauriac, according to Page Six, and has spoken with the media about her experience as a mother only a handful of times. Speaking with Vanity Fair for a recent cover story, she touched on the ways motherhood prepared her for her Jojo Rabbit role. “The experience of being a mother was very helpful, and it was a great tool,” she told the magazine.

This isn't Johansson's first time playing a mom, though. She took on the complexities of marriage, motherhood, and divorce in her recent Netflix film, Marriage Story. In an interview with USA Today about that powerful role, Johansson talked about how Rose helps to get her through her tough days as a single mom. "It doesn’t mean I didn’t have a breakdown like either of these characters do — I still have them — but I really credit also having my daughter there," she said. "When I look at her, I feel full of hope and positivity. It’s good to wallow for a little bit. And then you have to pull yourself up."

In the same Vanity Fair interview, Johansson talked co-parenting with her ex and the challenges that come with it. “You know, understanding what it is to co-parent — that’s a very specific thing. It’s hard to raise a child with someone you’re no longer with. It’s hard," she said. "It’s not probably how it’s ‘supposed to be’ — in quotes — or whatever … But, you know, I think my ex and I do it as well as we can. You have to prioritize your child and not put yourself in the middle. It has its challenges.”

It's unlikely that Johansson's daughter will take much of an interest in her Jojo Rabbit or Marriage Story roles right now, though — she wasn't even impressed with her mom's Avengers Black Widow portrayal. "My daughter loves fairy tale things," she told USA Today in April. "She loves girl things, princess stuff. And I love it, too! I love all the Disney princesses from back in the day. Now they’re much more empowered than some of the older, classic ones. But you’re sort of battling that a little bit, and you start to see how the dynamic of those classic fairy tale stories affect the way that your children think about the male/female roles in society. It’s very black and white."

Johansson has expressed a desire to continue growing her family in the past. “The idea of building a family, making a family and having that work, I like that idea. I think that would be wonderful. I’ve always wanted that. I wanted that also in my marriage to my daughter’s father as well. It just wasn’t the right person. But I like that idea … I mean, the first time I got married I was 23 years old," she told Vanity Fair.

Now that Johansson is engaged to Saturday Night Live comedian Colin Jost, perhaps she'll make that dream come true some day. In the meantime, I'm sure Rose will be cheering her mom on at the Oscars with all her might.