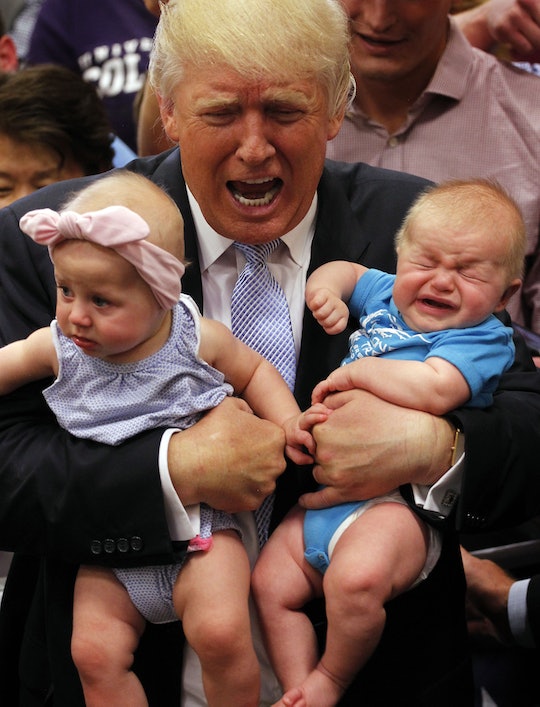 It seems like every day we get closer to the election, a new, horrifying story comes out about Republican presidential nominee Donald Trump. You would think that these stories couldn't get much worse — after all, we've already had to deal with egregious sexism and racism throughout his campaign. Mother Jones this week put together a series called "The Trump Files," in which the outlet reports a new story about Trump every day from now until the election. On Thursday, the outlet reported that Trump allegedly cut medical care for a sick child once, as an alleged act of revenge. To make matters quite worse, the child was his grand-nephew.

After Fred Trump Sr. (Donald's father) passed away, there was a period of turmoil within the Trump family. The Trump patriarch left somewhere between $100-$300 million to his children and their families. His oldest son, Freddy, received significantly less than his siblings. Freddy's grandson, an 18-month-old baby at the time, depended heavily on the medical coverage provided by Fred Sr. because he suffered from severe seizures. Donald allegedly cut off Freddy's family from the medical coverage necessary for the baby after they sued Fred Sr.'s estate for shorting them in the will.

Trump spoke to The New York Daily News about the lawsuit that played out in Queens Surrogate Court back in 2000. Heidi Evans, a reporter for the Daily News, asked the New York real estate mogul about the family drama. Trump responded by stating that "when [his nephew] sued us, we said 'Why should we give him medical coverage?'" He continued when Evans questioned whether he was concerned the decision appeared cold hearted, saying he "can't help that."

"It's cold when someone sues my father," he said. "Had he come to see me, things could very possibly have been much different for them." Trump spokespersons did not immediately return a request for comment.

Back in 2000, this was a sensational story for gossip magazines. Evans wrote in her original reporting that the lawsuit "offer[s] a rare window into one of New York's most prominent families, a world where alliances and rivalries are magnified by power, money and the tough nosed tactics of Donald Trump."

There were no reverberating consequences for the general public when Trump allegedly decided to seek retribution through Freddy's 18-month-old. Sixteen years after the fact, though, this mean streak could become a devastating aspect of American society.

Holding the office of President of the United States is one of — if not the most — sensitive positions in the world. The United States is one of the world's greatest super powers. A legion of nations depend on us as an ally, protector, and leader in international affairs. Many have now been forced to imagine a man known to seek revenge for personal slights having access to nuclear codes.

Trump is the father of 5 children, who all seem to really love and support their dad, so it's hard to grasp that he would not have empathy for another parent in a tough situation. We should start paying closer to attention to allegations like these. They may reveal more about what a Donald Trump presidency could look like than we realize.

More Like This
Elon Musk's Child Files To Change Name, No Longer Wants To Be "Related" To Father
Post Malone Just Revealed He's Welcomed His First Child AND He's Engaged!
Princess Charlotte Got So Excited To Shake A Royal Fan's Hand
Jennifer Lopez Is Being Praised After Introducing Her Child With Gender Neutral Pronouns