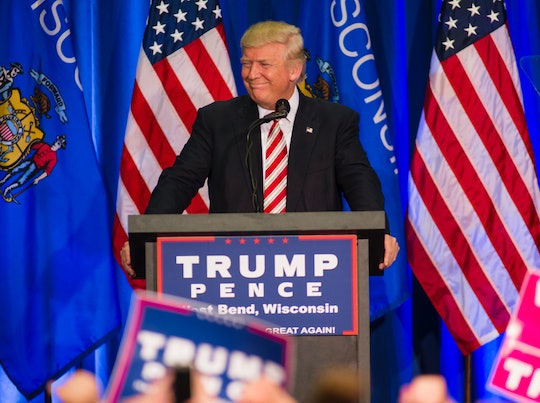 Oh how the times have changed for what was once the unstoppable Donald Trump campaign. The GOP Presidential candidate has been struggling to regain momentum in recent weeks after a slew of ill-chosen statements. And how is he faring? Well... not so great. At a rally on Friday, Trump appealed to black voters for their support. And it was beyond cringe-worthy.

Trump was speaking in Dimondale, Mich., a town about 90 minutes away from Detroit. According to report by The Washington Post, he cautioned against voting for Democratic candidate Hillary Clinton:

Trump then spoke to the predominantly-white crowd at Dimondale about nearby Detroit.

Detroit tops the list of most dangerous cities in terms of violent crime, number one. This is the legacy of the Democratic politicians who have run this city. This is the result of the policy agenda embraced by crooked Hillary Clinton.

But he saved his one-two punch for the end, his big bid to gain the confidence of black voters.

It was a bold strategy, I guess. Telling the black community, essentially that, since their lives were pretty rough as it is, how much worse could it get?

Clearly, Trump has struggled to appeal to the African-American community at large; although he promises that is going to change. So far in his campaign, Trump has often polled as low as zero to one percent with African-American voters, who could have potentially taken offence to certain claims he shared on his ever-evolving Twitter feed.

At the end of his speech (again, I feel I must reiterate, to a predominantly white crowd in an overwhelmingly white town), Trump said:

And at the end of four years, I guarantee you that I will get over 95 percent of the African-American vote. I promise you. Because I will produce.

This was, according to Politico, the only off-the-cuff moment of the night's speech. Trump has begun to use his teleprompter to help guide him through the murky waters of public speaking as a potential president.

Perhaps next time, the teleprompter will tell him not to tell people that their lives are already awful so what the hell? Give him a chance.