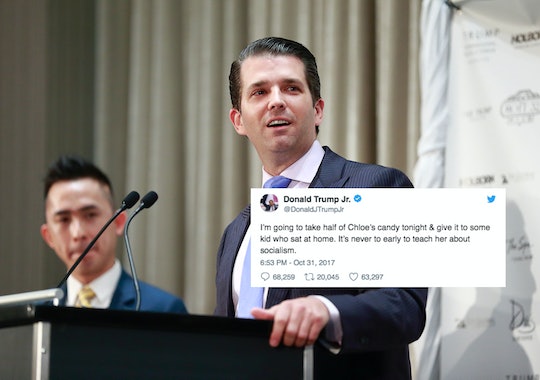 Donald Trump Jr. Joked About Taking His Daughter's Candy To Make A Political Point, & People Are So Pissed

I'm not sure that Donald Trump Jr. has ever really been anyone's definition of #dadgoals, but on Tuesday, the president's son (and father-of-five) shared a photo on Twitter that led to some serious online eye-rolling. In the caption accompanying the shot of his daughter showing off her Halloween haul, Donald Trump Jr. joked about socialism and taking away his daughter's Halloween candy to "teach her about socialism." And while he may have thought it to be a pretty clever dig, social media users wasted no time before skewering him for it.

According to People, Trump Jr. used the holiday to double down on his support for his father's administration — in addition to dressing up in an American flag outfit, Trump Jr. also wore a Donald Trump face mask. And it's probably not a big stretch to assume he had a say in his kids' costumes too: two of his sons dressed as United States Army soldiers, while one of his daughters went out as an NYPD police officer. Although it definitely looked like the family had a good time trick-or-treating, the fact that he used the photo an an opportunity to take a shot at socialism had many followers groaning. Especially since, well, his argument didn't exactly hold up the way he'd intended.

The idea of socialism has long been a popular target for the GOP, who has used it as a justification against things like single-payer health care. Their argument usually suggests that so-called socialist policies would unfairly punish hardworking Americans who have to sacrifice their own wealth to provide for others with less (who, presumably, have done nothing to earn it). By that logic, it's easy to see why so many Americans voted in favor of a POTUS who was championing the repeal of Obamacare (it might mean that millions of Americans would be left uninsured, but at least they would no longer be chipping in for their pesky birth control pills!), except, as the responses to Trump Jr.'s tweet show, that's not really how it works.

A number of Twitter users took Trump Jr. to task for not recognizing the fact that Halloween is essentially socialist by nature — his daughter got the same free candy as everyone else just by showing up, not because she earned it or did anything special:

While others — including celebs like John Legend and Ricky Gervais — took a dig at Trump Jr. himself, suggesting that he and his family may not exactly be setting the best example when it comes to being role models for children:

Others used Trump Jr.'s example to point out that while his socialism joke is supposed to insult liberals, it just shows that he doesn't quite understand the argument. As many noted, the left-wing "socialist" policies he's maligning aren't about taking things away from people unfairly, they're about ensuring that all Americans have access to things that they believe should really be fundamental rights for all citizens:

And some couldn't help but point out that perhaps Trump Jr. wasn't necessarily the best person to try and advance an attack on socialism, given his immensely privileged upbringing:

Others took the chance to note that, instead of snickering about his misguided understanding of socialism, he could have actually taught his daughter a valuable lesson about compassion:

All in all though, Trump Jr.'s tweet isn't entirely surprising. Despite plenty of evidence to the contrary, the idea that anyone can succeed in America if they work hard enough is still a widespread belief held by many. And Trump and his children definitely seem to be big believers that wealth and prosperity all comes down to hard work and pulling yourself up by your bootstraps.

In her book, Women Who Work, for example, Ivanka Trump wrote about earning her success through hard work and sacrifice, despite being born into the kind of privilege that most people can only dream of. Then, of course, there was the time the president himself spoke about how hard he'd worked to succeed in business, according to CNN, while also sharing that his father gave him a "small loan of $1 million" to help him get started.

It's pretty clear that a lot of people found his tweet to be pretty irritating. But hopefully the backlash has at least taught Trump Jr. that if you're going to make a joke about socialism and taking your little girl's candy, then you should probably make sure you know what you're talking about.