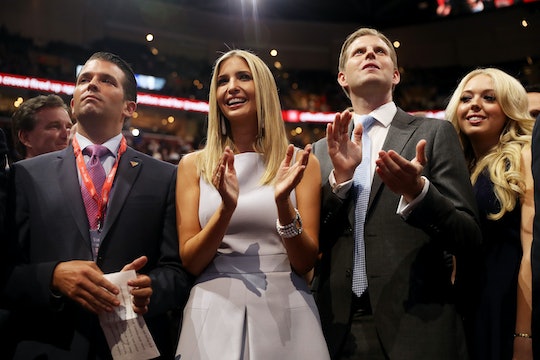 Trump’s Kids Wanted To Cut Their Sibling From Dad’s Inheritance & It’s So, So Cold

Listen, family drama is inevitable, for the most part. Whether it's coming from a place of love, jealousy, or some deeper, more intense emotions, families fight, and it's usually pretty normal. But sometimes when families fight, it becomes a much bigger issue. When the public is drawn into a certain family's drama, it almost becomes addicting to watch (ahem, Keeping Up With The Kardashians). But today's spotlight on family drama is bit more political. Well sort of. Yes, you read that headline correctly: President Donald Trump's kids tried to "bump" one sibling out of his inheritance...allegedly, that is.

Now, it's important to remember that the evidence of this claim rests solely on an interview between Trump and Howard Stern back in 2005. In it, Stern and Trump discuss Trump's children, as Trump's third wife, Melania, was pregnant with his fifth child, Barron, at the time of the interview, as People reported on Tuesday.

According to the segment, Stern asked Trump, "Do your older children get nervous every time you have another child?" at which Trump initially dodged the question, reverting to telling a story about another one of his rich friends having kids, according to People. "I have a friend who is also like a very rich guy," Trump reportedly replied, "and he said how his children hate the new children coming along and everything else."

Trump then went on to explain about his friend, as he told Stern, "Yeah, because every time you have a child, it’s 20 percent less to the people," likely meaning that every time he has a child, his existing children get less of a cut of their inheritance. But, that wasn't the end of the interview. As Newsweek reported:

The conversation quickly switched paths to the subject of “making love to Melania during the pregnancy,” but not before serving one last, swift blow to Tiffany Trump.

Soon enough, Stern was asking Trump if there was any truth to rumors that Ivanka and Donald Jr. were attempting to "bump off a child" from their future inheritance, as People reported. Trump responded with a simple question as to which child was reportedly being bumped off, "Tiffany?" to which Stern agreed. Then, after Trump refused to answer the question for a while, Stern pressed him harder. "Is there any truth to that?" Stern asked, and then again, as he told Trump to "tell me the truth."

And Trump's response? It was just one word, according to People, but it spoke volumes: "Yes."

Of course, many will remember Trump's statement to Fox News that he was proud of Tiffany "to a lesser extent" than his other children, and the many jokes that she is, unfortunately, "the other Trump."

Furthermore, it's also important to recognize that these tapes were from over 10 years ago, and neither of Trump's children have spoken about the matter of "bumping" Tiffany out of the inheritance. So really, the revelation that they have attempted to "bump" one of their siblings from their father's will isn't that noteworthy.

Especially considering the many other events, humanitarian crises, and more going on in the world, Trump's children fighting over money really isn't anything that surprising or important. What is important, however, is that this tape of Trump on The Howard Stern Show is just one of many that Newsweek received. In fact, the publication exclusively received "15 hours of Trump talking to Stern from 1993 to August 25, 2015," which could prove to be even more enlightening and eye-opening than his children arguing about money. Maybe.