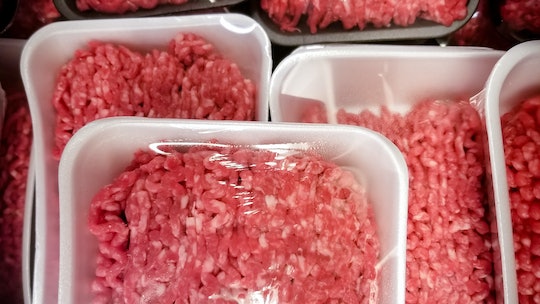 CDC Says E. Coli Outbreak Is Linked To Ground Beef — Here's What You Need To Know

For many parents, cheeseburgers, lasagna, and meatballs are often household staples and quick go-to dinners for any weeknight. But according to a new update from the U.S. Centers for Disease Control and Prevention, you should be careful while handling raw beef. The CDC said on Friday that an E. coli outbreak is linked to ground beef but that the outbreak, which has infected 109 individuals in six states, has not yet been traced to a single supplier, distributor, or brand of ground beef.

The number of cases of illness has increased by 13 individuals since the CDC’s previous update on the outbreak earlier this month. It has also spread to an additional state, according to CDC’s most recent update, with illnesses now being reported in the following states: Indiana, Georgia, Kentucky, Ohio, Tennessee, and Virginia. There have been 17 hospitalizations associated with the outbreak, but no serious or fatal conditions have been reported since the first symptoms from the outbreak began on March 2. Authorities and health officials are continuing to investigate.

Symptoms of the illness, which include severe stomach cramping, diarrhea, and vomiting, begin three to four days after contamination. The illness can last from five to seven days. If experiencing symptoms, the CDC recommends calling your doctor and writing down everything you ate a week prior to feeling sick.

Because the CDC has not yet identified a common source, it has not issued a recall nor is it recommending that consumers avoid eating or buying ground beef altogether.

The agency instead suggests handling ground beef safely and cooking it thoroughly with a food thermometer to avoid eating undercooked or raw food. If eating at a restaurant, the CDC says, it is safe to request that ground beef hamburgers or mixtures, such as meatloaf, be cooked to an internal temperature of at least 160 degrees. The CDC also recommends washing hands and kitchen items thoroughly and handling raw meat with care to avoid cross contamination.

This spread of E. coli follows on the heels of another recent outbreak involving romaine lettuce earlier this year. There were 62 reported cases of the infection at the time across 16 states, and it resulted in a recall of red leaf lettuce, green leaf lettuce, and cauliflower harvested by Adam Bros. Farming, Inc., in California, according to USA Today. At the time, the CDC recommended always washing your hands and produce thoroughly before preparing fruits and vegetables. It also recommended using separate cutting boards for fruits and vegetables and for raw meats in order to avoid cross contamination.

The FDA and CDC investigated farms and cooling facilities in California before issuing a recall and the outbreak appeared to be over as of Jan. 9, 2019.

While ground beef is definitely a household staple that is easy to grab at the grocery store and mold into quick or extravagant dinners, it is important for everyone to be vigilant about cleanliness and cross contamination while cooking in order to avoid illness. Next time you’re grilling burgers for the family cookout, remember to double check that the meat is cooked and wash your hands before digging in.

More Like This
Can The Baby Have That?
This Is What Experts Say About Eating Hot Dogs During Pregnancy
Delicious Juneteenth Recipes Your Whole Family Will Love
Bunmi Laditan Hopes There’s No Cooking in Heaven