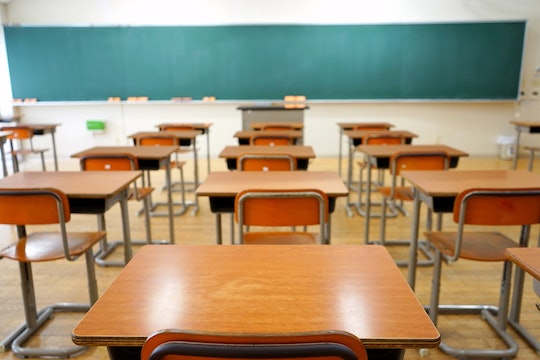 In response to the rash of mass shootings across America, some schools have started to participate in active shooter drills. One of these schools is Meadowlawn Elementary School in Monticello, Indiana, and some of its teachers claim they were shot with fake bullets during an active shooter drill in January 2019, as The Indianapolis Star reported Thursday. Now some teachers in the Hoosier state are banding together to stop this from happening in the future.

There's a lot of debate surrounding whether or not active shooter drills are effective. Some argue that these mock emergencies don't prevent mass shootings, something that was brought up after the February 2018 mass shooting at Marjory Stoneman Douglas High School in Florida. One month before the shooting, the school carried out an active shooter drill, according to The Daily Beast, and many gun safety advocates bring this point up in debates about common sense gun laws.

Others worry about the emotional consequences these active shooter drills can have on children and staffers. One eighth-grade student in Virginia, for example, sent her mom an "I love you text" during an active shooter drill because she mistakenly thought it was the real thing, according to the Tampa Bay Times. "To find out later she sent that text because she was in fear for her life did not sit well with me,” the student's mom said, as the Tampa Bay Times reported.

"During active shooter drill, four teachers at a time were taken into a room, told to crouch down and were shot execution style with some sort of projectiles - resulting in injuries to the extent that welts appeared, and blood was drawn," the ISTA's Twitter account tweeted during the meeting.

"The teachers were terrified, but were told not to tell anyone what happened. Teachers waiting outside that heard the screaming were brought into the room four at a time and the shooting process was repeated," ISTA said on Twitter.

One teacher, who asked for anonymity, recounted to The Indianapolis Star: “They told us, ‘This is what happens if you just cower and do nothing.' They shot all of us across our backs. I was hit four times. It hurt so bad.”

White County Sheriff Bill Brooks, whose department reportedly led the training at Meadowlawn, toldThe Indianapolis Star that the teachers in question "knew they could" be shot in the drill. "We were made aware that one teacher was upset," he explained to the publication. "And we ended it." The teachers who were present for the drill, however, claim they were not warned beforehand.

The ISTA and Meadowlawn Elementary School did not immediately respond to Romper’s requests for comment.

In light of the events in January, teachers asked Indiana's Senate Education Committee to "add language into one of their school safety bills to prohibit educators or staff from being shot with any kind of projectile," according to Slate.

"No one in education takes these drills lightly," ISTA tweeted about the request. "The risk of harming someone far outweighs whatever added realism one is trying to convey here. ISTA requests an amendment in bill so that more reasonable limits are placed on these drills."

After the teachers' complaints went public, many people took to social media to voice their concerns.

"This is NOT acceptable," one person tweeted in response to the ISTA's Twitter thread. "I am appalled."

"Teachers don’t get paid enough to just teach. Let alone be subjected to this," someone else said.

Another person added, "This is abuse. NOT TRAINING. #juststaying #canyousayLAWSUIT? It is not part of my contract to have pellets shot at me. I AM A TEACHER, NOT A TARGET."

Hopefully, there will continue to be more conversations about how exactly active shooter drills can be effectively used in schools, as well as the need for common-sense gun laws. As some experts have pointed out many times before, gun safety policies are a vital component in keeping kids safe.

More Like This
Dads Share What Paid Family Leave Would Mean To Them In Heartwarming Video
Exclusive Eureka! Clip Introduces Star Of Disney’s New STEAM Preschool Series
Adorable Fireworks Crafts To Celebrate The Fourth
How To Explain Juneteenth To Your Kids — With Joy & Truth