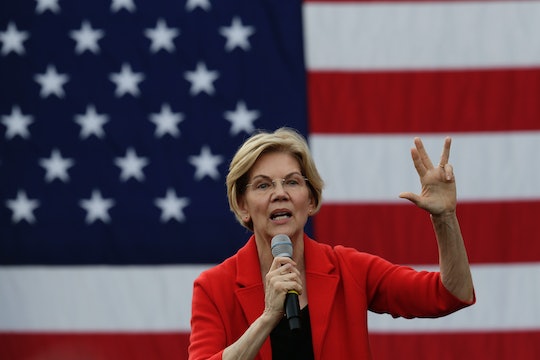 Elizabeth Warren Has A Plan For Everything — Even Your Love Life

If you keep up with politics — or at least the 2020 presidential candidates — then you've probably noticed a trend when it comes to Elizabeth Warren. The Massachusetts senator is among a large field of candidates vying for the Democratic nomination. However, her detailed policy plans have continued to gain her recognition. Got a problem in society — from the rising costs of a college education, to a lack of quality, affordable childcare, to the deadly opioid epidemic? She's got a kick-*ss policy to turn things around. In fact, Elizabeth Warren has a plan for everything — even your love life. (Or lack thereof.)

In light of Sen. Warren's reputation for having a plan up her sleeves for all occasions ever, a comedian named Ashley Nicole Black posed a tongue-in-cheek question to the Twitterverse on Saturday, May 18. “Do you think Elizabeth Warren has a plan to fix my love life?” she tweeted, according to NPR. The thought elicited plenty of hilarious responses. One Twitter user quipped, "Probably not but if you gave her a fresh legal pad, a couple of #2 pencils and 25 or 30 minutes she could sort you out."

Black had zero expectations of getting a response. The next day, though, Elizabeth Warren’s official Twitter account actually answered her question. “DM me and let’s figure this out," the Democratic nominee candidate wrote. This tweet, for the record, has since been liked nearly 74,000 times

"I knew I could count on you," Black replied. It isn't clear if Black actually DM'ed Elizabeth Warren, or if the senator really offered any advice at all. But still! You have to admit the exchange is pretty darn epic.

In response to Elizabeth Warren actually acknowledging her question, she also tweeted, "I am deceased. And ready to welcome new love in my life. And then get our new pres elected. #shehasaplan."

In case you're wondering, Twitter promptly lost it, too. "This is the most magical thing I've ever seen happen on this website or anywhere," writer Katie MacBride commented. "It is the literal opposite of the presidential twitter we've had for the past two and a half years and I could not be any more here for it."

Another Twitter user simply shared a GIF of a particularly round cat flopping over on its side with the text, "*dies*."

Another person in need of an Elizabeth Warren love life plan wrote, "Can I get in on this or."

It's so refreshing, though, isn't it? Considering the types of Twitter interactions coming from our current POTUS and all. Although Elizabeth Warren certainly wins the award for "Tweet of the Day" — and has an impressive amount of policy plans — it's worth noting she's still lagging behind other prominent Democratic nominees. former Vice President Joe Biden, Senator Bernie Sanders, and Pete Buttigieg, according to The Guardian.

I'm still not 100-percent sure who will get my vote in the primaries for the 2020 election. However, between her detailed plans, her principles, her wit, and her Twitter game, Elizabeth Warren is a serious contender.

More Like This
Obamas Issue Powerful Statements After Supreme Court Ends Roe v. Wade
Keep Talking To Your Kids About Abortion — It's More Important Than Ever
This Map Illustrates Just How Many States Would Ban Abortion If Roe V. Wade Is Overturned
Reddit Is Not Impressed With Dad Who Hid Neighbor's Gnome Because It Scared His Kid