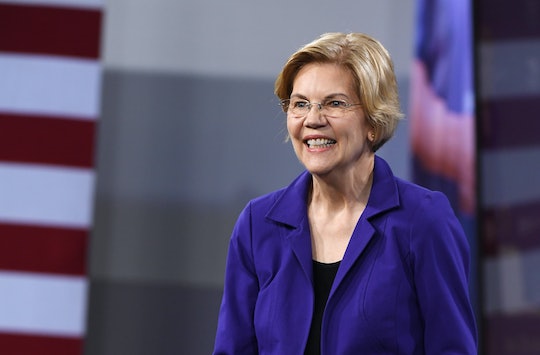 There are a lot of people vying to replace President Trump in the oval office in 2020 — and Democratic Sen. Elizabeth Warren is one of them. Over the next year, people will be wanting to know these candidates stances on big issues of value, like education — and Warren's views on this are anything but controversial. People should love that Elizabeth Warren's stance on education would include replacing Betsy DeVos, the Secretary of Education, with a former public school teacher. I mean, she has a point.

On Monday, Warren sent out an email to her supporters, promising one major thing if she were elected in to office. Instead of picking just any person to fill the role of Secretary of Education, Warren promised her supporters to put a public school teacher — someone with first hand experience in teaching students — in the position. "Let's get a person with real teaching experience," she wrote in the email, according to BuzzFeed News. "A person who understands how low pay, tattered text books, and crumbling classrooms hurts students and educators."

Before DeVos was appointed to her position, she served as the chairman of the Windquest Group, an enterprise and investment management firm. Some of the strongest advocates are people who have first hand experience in what they're advocating for. So, it makes sense that Warren would want someone in such an important role to know what they're doing. Warren herself was a teacher and professor before she became a Senator.

But this isn't the only element to her stance on education. Warren has been an outspoken supporter of public education as a Senator and will continue with this if elected into the White House.

Warren is an advocate for universal child care, allowing parents to work while ensuring their kids are taken care of and given proper early childhood education at a low cost. Warren's plan guarantees "high quality child care and early education for every child in America, from birth to school age," according to an essay that she penned for Medium.

And her passion for education extends past those early years. She has sponsored bills to provide comprehensive sex education in schools, fought to preserve lunch programs inside of schools, and has highlighted the importance of investing in public education, according to On The Issues.

But perhaps the biggest highlight of Warren's stance on education is her plan to cancel student loan debt and make public college free to attend, according to USA Today. In an essay penned for Medium, Warren wrote that she would cancel up to $50,000 in student loan debt for 42 million Americans. And to ensure that this will never happen again, she plans on making college education free.

How's that for investing in the future of children?

Warren's newest stance is anything but controversial. When a new president gets elected, they nominate their own Secretary of Education to operate in their administration, according to the Atlantic. So, if Warren were to be elected, DeVos wouldn't come with the new position in oval office. On top of this, Warren has been an outspoken opponent of DeVos'. In January 2017, she said that she wouldn't be voting for DeVos to serve in the role, by stating that it wouldn't be in the "best interests of young people in America."

Placing a public school teacher in the role would be a statement to show people that Warren means business. As a long time champion of education, she isn't going to skimp on this if she were to get elected into office.

More Like This
How Title IX Changed The World For Girls
Dads Share What Paid Family Leave Would Mean To Them In Heartwarming Video
This Map Illustrates Just How Many States Would Ban Abortion If Roe V. Wade Is Overturned
Obamas Issue Powerful Statements After Supreme Court Ends Roe v. Wade