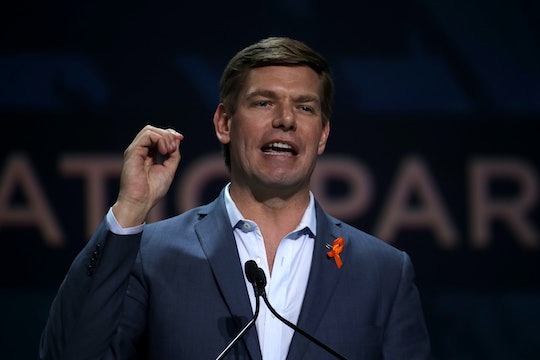 It's no secret political debates can get a little heated at times, a sentiment some viewers witnessed Thursday night when California Rep. Eric Swalwell told former Vice President Joe Biden to "pass the torch," suggesting that America is in need of new leadership. As for Twitter's reaction to Eric Swalwell's comment about Joe Biden? Some viewers think it was a bit "ageist," while others thought he brought the right amount of heat and humor to the second Democratic debate.

If you're not already familiar with Swalwell, he has served as a representative for California since 2013. He's also 38 years old, making him one of the youngest Democratic contenders, with South Bend, Indiana Mayor Pete Buttigieg beating him out for the title at age 37.

The topic of age is often brought up during presidential races, due to potential health concerns or lack of experience, to name a few talking points. But when Swalwell brought up generational differences at the debate, it was to illustrate the argument that older politicians should step aside for the younger ones.

Instead of speaking about the issue in general terms, Swalwell shared a personal anecdote directed at 76-year-old Biden, stating, according to The Hill:

Can you say burn? Biden's words have literally come back to haunt him.

When Biden was asked if he would like to respond to Swalwell's jab, he joked, according to ABC News, "I would. I'm still holding on to that torch."

The exchange was a bit tense, to say the least, and some viewers picked up on the drama pretty quickly.

Someone else said: "Eric Swalwell you’re a messy b—h who loves drama and I’m here for it."

"DAMN ERIC SWALWELL WITH THE SICKEST BURN OF JOE BIDEN," a commenter penned.

Others found the anecdote to be a bit ageist, calling out young whippersnappers like Swalwell for supposedly being rude to their elders.

"Eric Swalwell looked like a jerk coming for him over his age," someone said. "A complete jerk. So he wasted his time. Biden responded to him like the irrelevant he is."

Another person commented: "Eric Swalwell’s comments have an ageist bent to them that makes me uncomfortable."

"@RepSwalwell I have loved you & I am sad you were ageist tonight," one viewer penned. "Not cool, says this older lady in Florida."

Then there were the folks who blasted Biden for his reply to Swalwell's quip, arguing that it is his time to let go of the torch.

A commenter remarked: "Joe Biden needs to let go of that torch. Period."

"'I'm still holding on to that torch.' - Joe Biden summing up his entire bullsh*t," someone else quipped.

And one user summed up the entire exchange with one hilarious joke:

"The last two minutes in summary:

Swalwell: Biden, you are old. Gimmie the torch.

Biden: You try to take this torch from my cold dead hands.

Kamala Harris: I will take the torch, now. Thanks. [silence]."

Whether you agree with Swalwell's comment to Biden or not, it's clear his words sparked a big reaction on Twitter, and I think it's safe to say that these presidential candidates won't live down the exchange anytime soon.