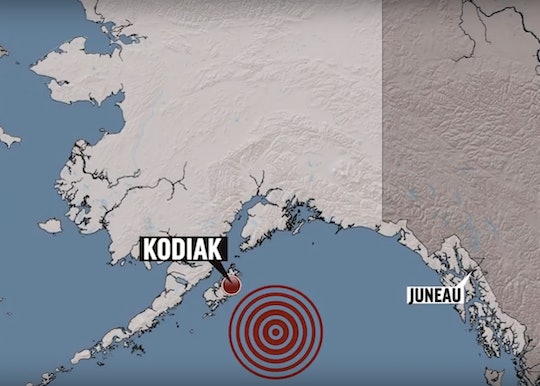 Everything You Need To Know About The Alaska Earthquake

The earthquake hit 173 miles (280 kilometers) southeast of Kodiak Island, Alaska, at a depth of a little over 15 miles (25 kilometers), at 12:30 a.m. GMT, according to the BBC. The Associated Press previously reported it as magnitude 8.2, but the magnitude was later updated. The first wave of the quake was predicted to have hit Kodiak Island at 1:45 a.m. GMT. Just before 2:30 a.m. GMT, officers with the Kodiak police reported water receding from the harbor and advised residents to stay where they were and await more information.

The National Weather Service (NWS) confirmed a tsunami, saying "some impacts are expected." Waves measuring between 0.4 feet and 0.7 feet were recorded in Kodiak, Seward, Old Harbor, Sitka, and Yakutat, Alaska. At least 17 aftershocks were recorded from the quake, ranging from magnitude 4 to 5.

Tsunami warnings were issued for Alaska and the West Coast of the U.S. and Canada, as well as some surrounding territories. While CNN reported small tsunami waves of less than one foot in Alaska, tsunami warnings were canceled around 8 a.m. Eastern Time "because additional information and analysis have better defined the threat," according to the National Tsunami Warning Center in Palmer, Alaska.

Even without tsunami warnings, San Francisco officials warned residents to stay away from the coasts for 12 hours, as "Shorelines, marinas and harbors may have "dangerous, strong & unpredictable currents," the San Francisco Department of Emergency Management tweeted.

Alaskan residents awoke to sirens blaring in several towns around 1:00 a.m. GMT on Tuesday and officials advised them to seek higher ground. The National Weather Service sent out warnings to residents' cellphones that read, "Emergency Alert. Tsunami danger on the coast. Go to high ground or move inland." Schools in Kodiak canceled classes on Tuesday, as many campuses were opened as emergency shelters during the night, according to the school district's Facebook announcement.

Reports on the duration of the vibrations differed between people. Fire chief Eddie Athey of Seward, a cruise ship town roughly 230 miles northeast of Kodiak Island, described the quake to ABC News as a gentle rattling that lasted for about 90 seconds. "It went on long enough that you start thinking to yourself, 'Boy, I hope this stops soon because it's just getting worse,'" Athey said.

Heather Rand of Anchorage, Alaska, told CNN that she has never experienced an earthquake that lasted as long as Tuesday's did. "It was a very long, slow build up. Creepy, more than anything. Definitely the longest, and I was born here," she said. Fortunately, Rand reported no damage to property aside from cracks in the drywall.

A buoy 188 nautical miles southeast of Cordova, Alaska, recorded a wave measuring at 30 feet at or around the time of the quake, according to the National Oceanic and Atmospheric Administration, but it has since been determined to be an anomaly. It is unclear at this time if it was at all related to the earthquake or if there was another cause.

NBC News meteorologist Bill Karins explained that it could have simply been a mistake:

We know one of the buoys showed a significant water rise right next to where the earthquake happened, but the next buoy didn't seem to experience that. We don't know yet what this means. It could have malfunctioned. We just don't know at this stage. It's too early to tell.

Damage by the earthquake appears to be minimal. For the time being, the risk of dangerous tsunamis hitting areas around the earthquake site seems to have passed.