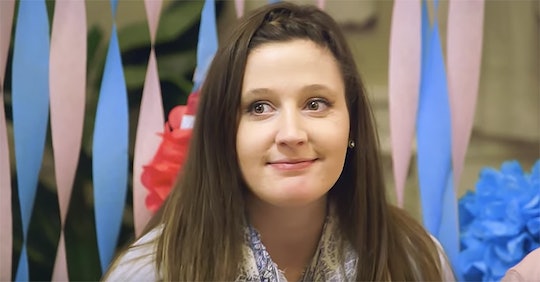 Little People, Big World star Tori Roloff is often the subject of pregnancy rumors. The rampant speculation makes sense when you consider Roloff has always been open about her to desire to give her 1-year-old son, Jackson, some siblings. As for when Tori will have another bun in the oven, some fans think the moment will come sooner than later. In fact, fans think Tori Roloff is ready to have another baby ASAP for this *adorable* reason. Buckle up for a load of cuteness, you guys.

Following the news on Tuesday that Jeremy and Audrey Roloff plan to leave LPBW, Roloff took to her Instagram stories later that day to take questions from fans. Roloff felt compelled to do the live Q&A because people were stressed about her future on the show. Not only did Roloff assure fans that she and her husband, Zach Roloff, will remain on the series, but she also dished on how many kids she wants in the future.

"3 or 4," Tori responded to a fan who asked about the number of kids she hopes to have, according to In Touch Weekly.

Hot diggity dog. It sounds like Roloff and Zach will have a big family one day.

But when will Roloff and get started on baby number two? People think this video of Roloff announcing her new dog via a sex reveal party is a sign she wants to have more kids sooner than later.

"Guess what?!?! world: meet Murphy! We are so excited to bring this friend home," captioned photos of her pup chilling in a box painted with the words, "It's a...," according to Instagram. "Our world just got a little crazier. #murphmonster."

As for the dog's sex, it's a male, and Tori adorned the box with blue balloons to celebrate.

Following the cute reveal, commenters took to the post's comments section to theorize more kids are on the horizon for Zach and Tori.

"That means your gonna have more kiddos," someone penned. "He’s adorable️ we recently got a puppy too."

"So does this mean we'll be hearing baby news soon????" a fan asked. "So excited for your family."

Another commenter chimed in: "He’s a cutie and has Sully’s coloring :) Congrats! You’ve got the dog, so what’s next? Maybe a baby girl."

"Yay!!! Does this also mean some time in the future another baby?" another person penned.

Based on other comments, it seems like Roloff made a deal with Zach on an episode of LPBW that she'd consider having another baby if they got a new dog. Although it's not exactly clear if this is the case, what's obvious is Murphy will fill a void in the family. Both Zach and Roloff were devastated when their first dog together, Sully, passed away in March 2017.

"We were supposed to make a family together," Zach said about Sully's death on an episode of LPBW, according to the Daily Mail. "Sully was supposed to take care of the baby and be his friend. Just tons of dreams and visions were crushed."

Aww. It's wonderful to see the two are have found happiness with Murphy. Congrats to Roloff and her family on their new addition.

As for the new baby thing, I'm not sure this will happen anytime soon. Think about it: Roloff just got a puppy and she has an infant to take care of to boot. I can't imagine Roloff would add a pregnancy to the mix when she's already under a lot of stress as it is.

It's possible, however, that Roloff will get pregnant once Murphy and Jackson get older. You never know.