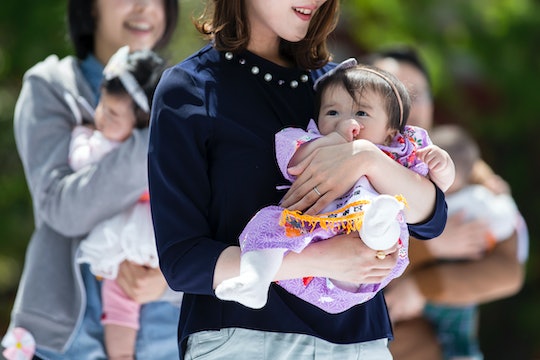 Motherhood comes with many changes — among which an increased salary is nowhere to be found. According to a study published earlier this year, first-time moms are affected by the gender pay gap, which widens for women after the birth of their first child. That means you have another mouth to feed, but since it's unlikely you'll be properly consummated your family could end up struggling.

According to the working paper circulated by the National Bureau of Economic Research, women and men evolve very similarly in their compensation until the birth of their first child, after which the gender pay gap significantly widens. In what is called the “child penalty” or “motherhood penalty,” first-time mothers fall behind men in compensation and do not catch up, according to the working paper. In other words, having a child permanently widens the pay gap for women.

According to the study, women start falling behind in their rank and probability of getting promoted right after the birth of their first child and then plateau in their earnings around 20 percent below their male counterparts after a decade.

The working paper shows that inequality in pay caused by child penalties has doubled in the recent decades, from 40 percent in 1980 to 80 percent in 2013.

According to numbers by the Pew Research Center, mothers experience more career interruptions than fathers. A greater number of mothers have reduced work hours, taken significant amount of time off from work, turned down promotions, and have even quit jobs in order to care for a child or family member.

A separate study conducted by the British trade union association TUC shows that not only are men largely unaffected by the child penalty, but they may actually experience a bump in their salary following the birth of a newborn. According to the study, fathers make roughly 20 percent more than men without children.

“When men have children, they are seen as responsible and stable — ‘He has a family to support,’” Sallie Krawcheck, co-founder and CEO of Ellevest, former Wall Street executive, and mother of two told CNBC.

The gender pay gap persists despite mothers being increasingly qualified. Another poll conducted by the Pew Research Center shows that a greater number of highly educated women with a Ph.D. or professional degree gave birth in 2014 than in 1994.

Mothers are also spending more time in the labor force than in the past, according to Pew. In 2016, mothers spent about 25 hours a week on paid work, compared to only nine hours in 1965. In fact, mothers are the primary breadwinners in four out of ten U.S. households.

Working mothers are also more likely than fathers to say that balancing family and work life is difficult, and women also feel more pressure to be involved as parents. According to a 2017 survey, 77 percent of respondents said that women face a lot of pressure to be involved as a parent, as opposed to the 49 percent who said that men face a lot of pressure.

The numbers make it clear: despite facing more pressure to perform better at home and in the workplace, women remain vastly underpaid when compared to the male counterparts.