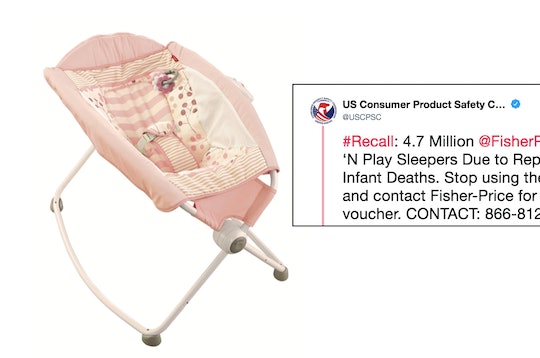 One week after the U.S. Consumer Product Safety Commission (CPSC) issued a joint safety alert with Fisher-Price regarding a popular product for infants, Fisher-Price has recalled all Rock 'n Play Sleeper models — about 4.7 million products in total — due to several reports of infant deaths. Parents are being urged to stop using the product immediately.

The recall comes days after a Consumer Reports investigation published earlier this week urged the company to recall the products, after finding in its report that Fisher-Price Rock 'n Play Sleepers were "tied to at least 32 infant deaths."

The American Academy of Pediatrics (AAP) also called for an immediate recall on the product, citing concerns that it does meet the group's recommendations for safe sleep practices.

"This product is deadly and should be recalled immediately," Kyle Yasuda, MD, FAAP, President of the AAP, said in a statement on April 9. "When parents purchase a product for their baby or child, many assume that if it’s being sold in a store, it must be safe to use. Tragically, that is not the case. There is convincing evidence that the Rock ‘n Play inclined sleeper puts infants’ lives at risk, and CPSC must step up and take immediate action to remove it from stores and prevent further tragedies."

And on Friday, April 12, the CPSC issued a recall notice on roughly 4.7 million Rock 'n Play Sleepers. "Infant fatalities have occurred in Rock ‘n Play Sleepers, after the infants rolled from their back to their stomach or side while unrestrained, or under other circumstances," the CPSC said.

The agency said in its recall notice that since the product was introduced to the market in 2009, "over 30 infant fatalities have occurred" in the product after "infants rolled over while unrestrained, or under other circumstances."

The CPSC said in its notice that parents and caregivers should stop using the products immediately and advise those who have one at home to contact Fisher-Price for a refund or voucher. You can call the company at 866-812-6518. Rock ‘n Play Sleepers ranged in price from approximately $40 to $149.

Regarding the recall, Fisher-Price told Romper in a statement:

In recent days, questions have been raised about the Fisher-Price Rock ‘n Play Sleeper. We stand by the safety of our products. However, due to reported incidents in which the product was used contrary to the safety warnings and instructions, we have decided to conduct a voluntary recall of the Rock 'n Play Sleeper in partnership with the Consumer Product Safety Commission.

Previously, the CPSC and Fisher-Price warned parents in their joint safety alert to not use the product after infants turn 3 months old or once they develop rollover capabilities. In its warning on April 5, the CPSC said it was aware of 10 infant deaths and all were 3 months old or older in age. But Consumer Reports' investigation had "turned up deaths of babies even younger than the 3-month threshold cited."

The AAP's safe sleep practices advises parents and caregivers always ensure that infants sleep on their backs and they should sleep on a flat and firm surfaces with no "bumpers, bedding or stuffed toys" nearby.

If parents have any questions or concerns about this recall, please reach out to Fisher-Price for further information. And if you have any concerns about safe sleep practices or how to properly use products with your baby, don't hesitate to talk with a trusted medical professional.