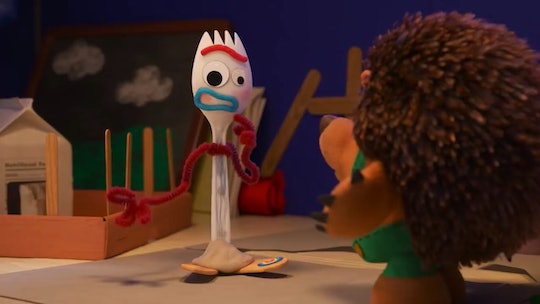 One of the best things to come out of Toy Story 4 has to be the lovable spork-turned-toy named Forky that Bonnie brought home from daycare, voiced by Tony Hale. And when the world couldn't get enough of the guy, Pixar gave Forky his own spin-off mini-series on Disney+. In one particularly fun episode, Forky Asks A Question teaches kids about pets through a series of questions posed to "twice decorated of the law Rib Tickles of the Pet Patrol division of Minneapolis Station." And while the answer doesn't totally make clear the definition of a pet, your kid is sure to love the four-minute episode nonetheless.

Forky Asks a Question covers a variety of topics, from "What is Love?" to "What is Time?" and everything in between. Admittedly, Forky doesn't always land on an actual answer, per se, but it's always a fun journey as the other characters of Toy Story 4 attempt to sate the spork's curiosity.

When Forky approaches Rib Tickles, he first asks the officer — who bares a striking resemblance to the characters of Paw Patrol — he begins by asking her if she is a pet herself. After some clarification that she's a toy, Rib Tickles tells Forky that only "real animals are pets." And to demonstrate what "real animals" are, Rib Tickles tells a somewhat disturbing tale of her interaction with "Dragon the cat in the antique store."

You see, what happened was Dragon swallowed Rib Tickles and she, ahem, "returned." After a much-too-vivid description of her journey through Dragon's intestinal track, Forky decides that he has grasped the concept of pets well enough to let the conversation end there.

Parents, I can't say that your kids will have a working definition of what a pet is after watching this episode of Forky Asks A Question. But what I can tell you is that my toddler has been watching the mini-series on repeat since the day we accidentally played an episode in her vicinity, and it has been fun for the whole family. Even if you only use Forky's question to launch into more detailed, complex conversations with your kids, the show is worth a watch.

More Like This
Exclusive Eureka! Clip Introduces Star Of Disney’s New STEAM Preschool Series
Everything Families Need To Know About The Westminster Dog Show
The Summer I Turned Pretty Is A Beautiful Coming-Of-Age Story For Teens & Parents
Chris “Ludacris” Bridges On Creating The World He Wants For His Daughters