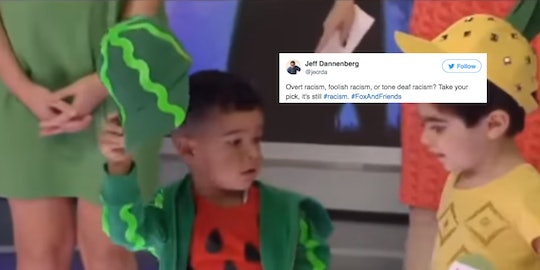 'Fox & Friends' Dressed A Black Child Up As A Watermelon, & Twitter Is Not Here For It

Halloween is almost here, and we all know what that means: a barrage of morning news fluff pieces showcasing cheap, last-minute, do-it-yourself costumes for all those parents who neglected to look at a calendar for the last month or so. What could go wrong? Well, dressing a black child up as a watermelon is certainly some bad optics, and people are letting Fox & Friends have it for the Sunday morning segment that some are calling tone-deaf, and others are calling just plain racist. Considering how many people were involved in the broadcast, from producers to on-air talent, it's pretty surprising that nobody made the connection. Fox News has not returned Romper's request for comment.

Watermelons have been used as a racist trope since black slaves were first emancipated in the 1860s, according to The Atlantic. Free black people grew and sold watermelons to make a living, and the fruit became a symbol of their newfound freedom. Southern white people responded by turning the watermelon into a symbol of every racist stereotype they could imagine. They equated the fruit's messy nature with uncleanliness, and used the fact that they're easy to grow to prop up the idea that black people were lazy. It's been 150 years, so the origins of the trope may have been forgotten by many, but it's hardly a well-kept secret that it exists, nonetheless.

It's hard to use ignorance as an excuse when less than two weeks ago, Fox News ran a story about a Detroit firefighter being fired from his new post after he presented his new colleagues — who are 90 percent black — with a watermelon as a welcome gift. "Several African-American firefighters at Engine 55 were offended by the watermelon, which has been used as a racist symbol since the slavery era," the article noted. Did somebody forget to tell everyone on the morning crew?

The choice to outfit a black child with that particular costume is disturbing, considering all the accounts by black Americans explaining how they feel they need to avoid eating watermelon in public, lest they provide fodder for racist jokes. This young boy surely had no idea what he was representing when his parents got the call for an early morning modeling gig on national television.

But while some people interpreted the costume as simple ignorance, others believe that it was a wholly intentional dog whistle, a wink to those Fox News viewers who know exactly what the connection is between black people and watermelons. Including children of color in the segment while outfitting one as a symbol of bigotry is a slightly subtler version of the "both sides" message that the network's number one fan keeps repeating.

Some are wondering if the notion of Fox News advancing racist ideals is even surprising. After all, this is the network where Megyn Kelly angrily insisted that Santa Claus is white.

Racial insensitivity has been a an ongoing trend on the network. Just last month, Fox anchor Sean Hannity assembled an exclusively white panel to discuss racism, according to Newsweek. Even worse, one of those panel members was Tomi Lahren, a women who's... Well, let's just say she's not known for sensitivity.

The worst part about this is that the child was unwittingly used as a prop, and that image will live on forever on the internet. One can only imagine the horrible racist memes it might spawn.

And for those who think complaining about the costume is "too politically correct," please understand that if we don't call out casual racism, it will only grow and faster to the point where Nazis are marching in the streets. Charlottesville was only two months ago; surely we haven't all forgotten already?

But there's a certain segment of the population that will always prefer their news in easily-digestible, heavily biased format, so it's hard to imagine things will change much.

All we can do is keep loudly pointing out that this is not OK, and we will not give racism a pass just because it's not completely overt.

Now the question is, will the network that's so fond of demanding apologies offer one of its own, or will it refuse to address the issue?

More Like This
Elon Musk's Child Files To Change Name, No Longer Wants To Be "Related" To Father
Post Malone Just Revealed He's Welcomed His First Child AND He's Engaged!
Princess Charlotte Got So Excited To Shake A Royal Fan's Hand
Jennifer Lopez Is Being Praised After Introducing Her Child With Gender Neutral Pronouns