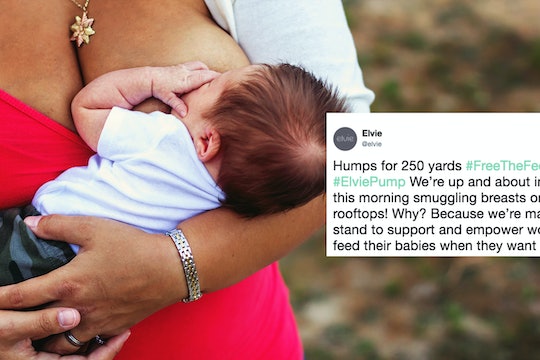 Imagine you're wandering around London on a holiday. You're taking in the sights, you're secretly hoping you might run into Meghan Markle and Prince Harry, everyone's accent is sort of awesome... and then you look up and spot boobs. Enormous boobs perched on the tops of buildings. If you're worried this is some sort of British inside joke you're not getting, fear not. Those giant boob balloons took over London to fight the stigma of public breastfeeding, and they're brilliant.

In the early hours of Mother's Day, which was celebrated in the United Kingdom on March 26, four massive, inflated boob balloons were set up in four different locations around London, as Yahoo Lifestyle reported. Much like actual boobs, they all differed in size and color and shape. And they were put there by Elvie, a tech firm focused solely on designer smarter technology for women's health.

As Elvie CEO, Tania Boler, explained to HuffPost UK, "The #FreetheFeed campaign is an invitation to everyone to stand with all those women that have felt shamed or confined when breastfeeding or pumping. We know the giant boobs will raise a few eyebrows, but we want to make sure no one overlooks the way that this stigma has been used to repress women."

It might seem as though in 2019 there wouldn't be a need for a campaign against the stigma of public breastfeeding, but sadly that's the reality we continue to live in.

Back in 2017, Health England conducted a survey of 500 mothers about potential barriers to breastfeeding, which the American Academy of Pediatrics continues to recommend mothers try to do exclusively for at least the first six months. In this survey by Health England, a full 63 percent of mothers still felt embarrassed to breastfeed their child in the presence of other people. Even, in some cases, their own families.

Another survey from this year of 2,000 women who had breastfed in the past five years found more than half of those women were forced to pump in the bathroom or in their car at work, and 30 percent stopped earlier than they would have liked because there were too many obstacles, as HuffPost reported.

Thankfully there have been giant boob balloons popping up all over London that will hopefully help to normalize public breastfeeding and end the shaming. And people seem to be really loving them on social media.

While the campaign has received mostly positive response, the most important thing is that its message gets received. That mothers feel more comfortable and empowered to feed their babies in public. And one mother thanked the #FreeTheFeed campaign for raising awareness in a tweet.

It doesn't seem possible that the ancient act of feeding your child with your body continues to need normalization because what is more normal than that? But it does. People continue to make women feel uncomfortable for breastfeeding in public, women at work have to hunch in cubicles to pump.

Here's hoping those giant boob balloons help to change the public's perception about breasts and what they were actually designed for.

More Like This
This Reddit Post About Two Sisters In A Fight Over Breast Milk Is Complicated & So Sad
Breastfeeding Twins: Everything You Need To Know
6 Ways To Fix A Shallow Latch So Your Baby Can Nurse Properly
Your Guide To Taking Tylenol While Breastfeeding