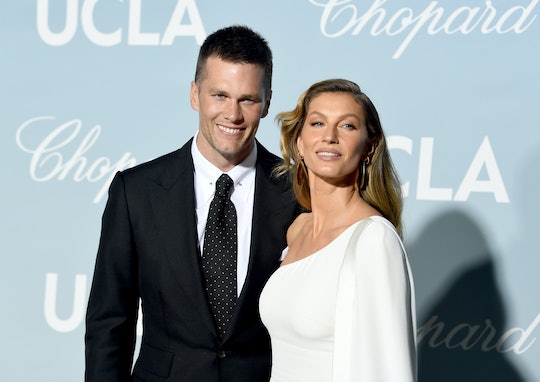 Gisele Bundchen Is A 'Bonus Mom,' Not A Stepmom — & She Feels 'Lucky'

She's not a regular mom, she's a cool mom. And to hear her tell it, Gisele Bündchen is also a "bonus mom" to husband Tom Brady's 12-year-old son John ("Jack") with his ex, Bridget Moynahan. Bündchen took to her Instagram story on Thursday to explain to her followers why she really doesn't like the term stepmom and prefers being called a "bonus mom" instead.

The supermodel held a Q&A session on her Instagram story on Thursday, where her followers asked her some hard hitting questions, wanting to know her favorite casual outfit that she loves to wear and her favorite book that she's read. But one follower asked a pretty important question: "How does it feel being a stepmom? I want a positive story for myself, because I am a stepmom." Bündchen's reply is worth noting.

"I don't like the word stepmom," she said. "I like the word 'bonus mom' because I feel like it's a blessing in my life. I feel so lucky that I get an extra, wonderful little angel in my life." Aww!

Brady and Bündchen have two children together — 10-year-old son Benjamin and 7-year-old daughter Vivian. Although she may be Jack's "bonus mom," Bündchen has been in his life, his whole life. In her 2018 memoir, Lessons: My Path to a Meaningful Life, Bündchen wrote that she was two months into dating Brady when he shared that his ex-girlfriend was pregnant, according to Us Weekly.

Now that Bündchen has been married to Brady for 11 years, she's been a part of Jack's life the whole time. What a special bonus for her.

In her memoir, Bündchen said that having Jack in her life inspired her and Brady to have children "sooner rather than later" so they could be close in age to him, according to Us Weekly. "[He made] my heart expand in ways I didn't know was possible," she wrote.

Bündchen was not short on parenting advice during the Instagram Q&A on Thursday. In addition to talking about being a stepmom, she also revealed how she and Brady are able to handle being the parents to three kids while having such busy lives. The secret? There actually isn't one. "I think we try to be present with the kids when we are with the kids and be fully there with them, listening to them, and I think it's not so much the amount of time, but the quality of time," she said.

"We never raise our voices, we never have arguments, we just talk things through, and it's really important that the energy of the house is loving and safe."

What great advice to take to heart.