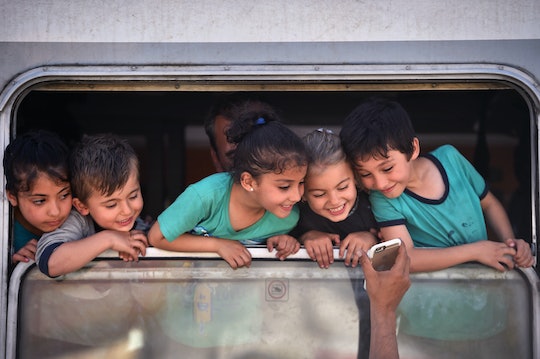 When it comes to modern parenting, there's a lot of unmapped terrain we're tasked with navigating — like issues relating to the internet, and the largely unregulated connectivity that our kids have at their fingertips. There's a lot to figure out, especially in regard to how it affects their self-esteem. That's why Glennon Doyle makes her kids' friends leave their phones at the door of her home... but people have mixed opinions.

Doyle, an author and philanthropist who runs the parenting blog MOMASTERY, uploaded a photo of a basket with all of her children's cell phones in the entryway of her home, as well as those of their pals. "I love my kids’ friends so much that I want them to talk to each other at our house. So Abby and I have them check their phones at the door," she wrote on the post. "Which we can do cause we’re the bosses of this house. They all act exasperated but seem interestingly relieved. Then, after a minute, they look at each other. And talk. And dance and laugh and stuff. And they remember that they are with their friends so there is no need to be anywhere else."

Some argued that the issue is a matter of comfort and safety. For some, taking a mobile phone with them to a friend's house is a way that they can ensure they'll always be able to contact their parents if they are in a situation they don't want to be. "What if a kid feels unsafe/uncomfortable and needs to text their parent to pick them up but doesn’t want to draw attention to themselves by going to get their phone?" one commenter suggested. "This is just grandstanding."

Another argued that it's more important to teach kids how to regulate themselves. "I understand where you’re coming from, but as parents we have to teach our children to limit themselves," another commenter added. "I think you need to take a good hard look at this. I can’t imagine what this did to the high anxiety kid in the bunch. Or the one being excluded or the one with a headache or whatever. By the number of phones there, odds are you had at least one kid that needed a lifeline."

(That individual did also update their comment to read: "Fast forward a smidge, Glennon, and I'm glad my son had his phone when the alcohol came out at a “chaperoned” party.)

However, on the opposite end, many people celebrated the technique and even said their kids were game for it, as well. "We have the same rule!! And our kids friends always say how much fun they have at our house and always want to come back. Coincidence? I think not!" one parent said. "Over the last six months or so I’ve intentionally been leaving my phone behind... I love that time away!" said another. "I showed this to my 16 year old son, he smiled and said 'good idea,'" said another.

Regardless of where you stand on the issue, the fact is that increased mobile device usage is linked to decreased social connection, and that's absolutely essential for mental health and development.

Last year, Psychology Today reported that though phones and social media are designed to foster connection, they often do just the opposite in social settings, leading people to sit near one another, while still staring at their phones. Though that doesn't necessarily mean that elimination during hangout time is necessary, Doyle's method might be the impetus some kids need to really connect one another. It seems like if all those present feel comfortable with it, it could be a great technique to try out.

More Like This
Tips To Co-Parent With A Stepparent Successfully
35 Relatable Quotes That Prove Being A Mom Isn’t Easy
Is It Safe to Take Ibuprofen While Breastfeeding?
Why Does My Baby Call Everyone Mama?