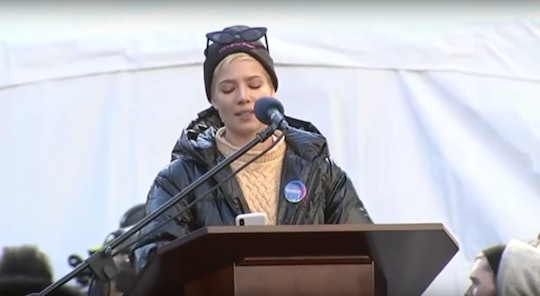 As difficult as this past year has been for many, it's also been an incredibly important time for women and minorities to come together and inspire one another. Which is exactly what happened over the weekend at the 2018 Women's March when scores of women took to the streets, across the globe, to make a powerful statement that they won't be silenced any longer. Halsey's poem, in particular, at the Women's March is definitely something everyone needs to hear. Not only because it's moving and empowering, but it also serves as a powerful reminder that the #MeToo movement has the potential to change damaging cultural norms deeply rooted in misogyny and make the world a more inclusive, equal, and respectful place for future generations.

(Note: Halsey's poem discusses rape, sexual assault, and miscarriage. Its content may be triggering for some readers and viewers.)

The singer behind hits like "Bad At Love" and "Castle" recited a poem at the Women's March in New York City on Saturday, Jan. 20 and it's truly moving. Taking the stage, according to Us Weekly, Halsey explained that she isn't really an expert speech giver, "unless it rhymes," so she wrote a poem to read out loud to the thousands of women who came together.

"It's 2009 and I'm 14 and I'm crying/ Not really sure where I am but I'm holding the hand of my best friend Sam/ In the waiting room of a Planned Parenthood," Halsey's emotional poem began. She then recounts her own experience being sexually assaulted and explains that she hopes the #MeToo movement will be the reckoning the world needs to put an end to rape culture.

After the march, Halsey uploaded the video to her Twitter, explaining that the poem was called "A Story Like Mine." Sadly, Halsey is right that too many people have a story like hers. Halsey recounts being assaulted in 2002 by a family friend, per Billboard:

He's got a case of Matchbox cars and he says that he'll teach me to play the guitar if I just keep quiet/ And the stairwell beside apartment 1245 will haunt me in my sleep for as long as I am alive/ And I'm too young to know why it aches in my thighs, but I must lie, I must lie

Then, Halsey moves to 2012 and opens up about being assaulted by a man she was dating. Per Billboard, she said:

And he wants to have sex, and I just want to sleep/ He says I can't say no to him/ This much I owe to him/ He buys my dinner, so I have to blow him/ He's taken to forcing me down on my knees/ And I'm confused 'cause he's hurting me while he says please/ And he's only a man, and these things he just needs/ He's my boyfriend, so why am I filled with unease?

This is something that is all too common. According to the National Sexual Violence Resource Center, one in 10 women will be raped or assaulted by their partner during their lifetimes. Halsey's own experience shared in this moving poem sheds light on how prevalent and deeply problematic these statistics are.

All of Halsey's experiences are troubling and the point of her poem proves that these conversations need to happen in order to initiate change. Women need to be heard and need to be believed in order to make this happen. Rape culture is all too prevalent in today's society and the idea that "boys will be boys" is accepted as common knowledge is problematic. One way parents can combat this, according to Bust magazine, is by encouraging young boys' emotional development in order to make sure that there isn't an "us versus them" mentality between young girls and boys.

Halsey also discussed having a miscarriage and continuing to perform and work in her poem, but perhaps the most powerful few lines come towards the end, according to Billboard, when she issues a battle cry:

And every friend that I know has a story like mine/ And the world tells me we should take it as a compliment/ But then heroes like Ashley and Simone and Gabby, McKayla and Gaga, Rosario, Aly/ Remind me this is the beginning, it is not the finale/ And that's why we're here/ And that's why we rally

There is an alarming number of #MeToo stories out there, and as disheartening as that is, Halsey's poem shows that, maybe, these stories coming to light will help culture change. And one day, maybe children will grow up in a much different world, one in which Oprah Winfrey's Golden Globes speech will become a reality.

Even though it might be hard to tell your story and listen to others, the way Halsey's speech at the Women's March has resonated with so many — women, young and old, as well as men — is a reminder that the #MeToo movement matters and it could change the future, a change that's already making an impact and a change that's worth fighting for. Truly, with the platform that these brave women have created, countless other have felt safe and empowered to come forward and speak out against the experiences and injustices they've suffered. Awareness fosters change, and that's exactly what #MeToo is doing.

As Oprah said at the Golden Globes, according to Harper's Bazaar:

And when that new day finally dawns, it will be because of a lot of magnificent women, many of whom are right here in this room tonight, and some pretty phenomenal men, fighting hard to make sure that they become the leaders who take us to the time when nobody ever has to say "Me too" again.

Keep telling your story, Halsey. And everyone else, keep standing behind those who come forward and keep working to fight for lasting change. Because as Oprah said, hopefully there will be a time when nobody has to say "Me too" again.