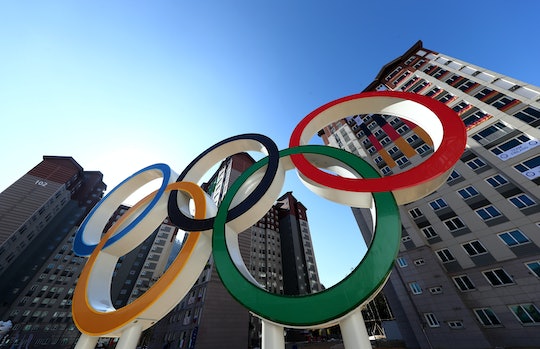 North Korea & South Korea Will Compete Together At The Winter Olympics, But Have They Before?

The Olympics is always an incredibly exciting time for both athletes and the viewers at home, especially when it comes to the opening ceremony. The opening ceremony is the time for audience members to get to know the host city and country, and be introduced to cultures and nations they might be a little unfamiliar with. This year's Winter Olympics, held in PyeongChang, South Korea, is no exception to this. And on Friday, during the Parade of Nations in the opening ceremony, both North Korea and South Korea will march together. But viewers at home might wonder if North Korea and South Korea have ever competed together before at the Olympics, especially after seeing them march on such a united front.

On Friday, athletes from North Korea and South Korea will march together under a unified flag, according to CNN, which represents the silhouette of both countries together. But they won't just be marching together, they will compete together, too. Women from both North Korea and South Korea will come together under the country, simply known as "Korea" to compete as a unified team for women's ice hockey.

If this seems like a huge deal, it is because it is. This will be the first time that there will ever be a combined Korean team competing during the Olympics, according to the Los Angeles Times, therefore making history.

But while a unified Korea might be competing together for the first time, this won't be the first time that athletes from North and South Korea are marching together. During the 2000, 2004, and 2006 Olympic Games, athletes from both Koreas marched jointly under the Korean unification flag, according to the International Olympic Committee, but competed for their respective countries during the games each time.

But just because North and South Korea are coming together to compete in Women's Ice Hockey doesn't mean that they're doing that for all of the sports. In addition to Korea, athletes will be competing under the Republic of Korea (South Korea) and the Democratic People's Republic of Korea (North Korea), according to the official website for the Winter Olympics. Still, they will be represented as one when they make their debut during the Parade of Nations.

Regardless of this, the fact that athletes from both nations can compete together is pretty amazing, especially since tensions between North and South Korea are often a little high. The Korean peninsula has been split since the 1950s, according to the BBC, but the fact that North Korea and South Korea are able to come together for this one sport means that "talks took place between North and South Korea for the first time in years" and could indicate times could be changing (but it won't magically clear up tensions between the two nations, according to the BBC). People saw a change in tension during the 2016 Summer Olympics, when gymnasts from North Korea and South Korea stopped to take a selfie together.

It is unclear if North Korea and South Korea will come together during the next winter Olympics in 2022, because a lot can happen and more than likely will happen before then. So people should recognize how big this unification is and cheer on the Korean women's ice hockey team when they do compete in the Olympics this week.