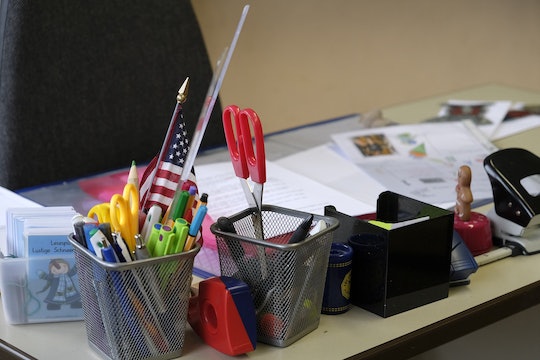 It's beginning to look like there's literally nobody President Donald Trump isn't willing to harm during his administration, other than his fellow billionaires. Trump's tax plan hurts teachers who pay for supplies out of their own pockets (that's, like, every teacher, if you didn't already know). According to the Washington Post, underpaid and underappreciated educators now spend an average of about $1,000 a year of their own cash on school supplies. They're picking up the tab not just for students whose families can't afford the basics, but also for classroom supplies that should be provided by the district.

Under the current tax code, K-12 teachers can deduct up to $250 from their taxes, and if you're not a math whiz, I'll spell it out for you: that's not enough. A bill called H.R. 2940, the Educator Tax Relief Act, was intended to double that amount (ahem, still not enough), but after being introduced in the House of Representatives in 2015, it sat ignored until the 114th Congress concluded nearly two years later. So what will Trump's new tax code do to that deduction? Keep it the same? Cut it in half? Don't be so naive. He wants to get rid of it completely.

This is just the latest in a long line of assaults against educators that began just minutes into Trump's administration. During his inaugural address, Trump lamented "an education system flush with cash, but which leaves our young and beautiful students deprived of all knowledge." He also characterized public schools as an example of — I kid you not — "American carnage." I'm sorry, what? Does he think that teachers are spending all day drinking Champagne and eating caviar while their students are running around the playground, Lord of the Flies-style? What would he know about public school, anyway? He and his five children all attended private school.

Then, of course, he appointed real-life Dolores Umbridge (also known as Betsy DeVos) as his Secretary of Education. This is a woman who is literally more concerned about grizzly bears in schools than racism. Her goal is to funnel a lot of federal education funding through parochial schools and into churches, to "advance God's kingdom." She has no training or experience with education, she and her children also never attended public school, and in a statement following her nomination, National Education Association President Lily Eskelsen García called her "dangerously unqualified" to lead the Department.

But wait, there's more! Trump's budget calls for a $9 billion cut to education funding. He's refused to discuss the matter with American Federation of Teachers President Randi Weingarten, despite her explicit request, although he did send Steven Bannon out to dinner with her in March to discuss "infrastructure, immigrants, bigotry, and hate" (those are Weingarten's words, per The Intercept). His tax plan would also reduce education tax breaks by about $65 billion over the next 10 years, according to Politico, and his plan to allow parents to use 529 college savings funds to pay for private K-12 tuition would help only those who can already afford it (and do nothing for public schools, obvs).

Now, the last hope for public schools, those sainted teachers who barely scrape by while paying for other people's kids to learn, are getting the short end of the stick the most direct way possible: right in their wallets. Oklahoma teacher Teresa Danks has taken to panhandling in order to cover her classroom supplies, and in July, she told the Washington Post that she's been shelling out $2,000 a year on school supplies, or nearly 6 percent of her own salary. "All this stuff, it costs money," Danks said. "I want the proper tools to do my job well." If you end up getting anything back on your taxes next year, consider sending your kid to school with a Staples gift card. They're gonna need it.