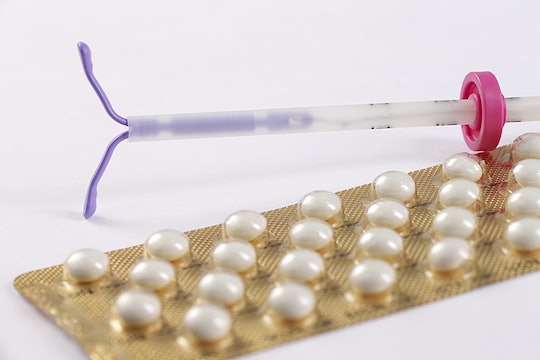 Trump's Birth Control Order Could Have A Surprising Consequence

When it comes to attacking women's health care, the Trump administration is surely succeeding. It's terrifying and frustrating, especially since President Donald Trump's rollback of birth control coverage would actually cause more abortions, according to NBC News. Which is very ironic: The whole push to allow employers to not cover birth control is based on the idea of protecting their "religious freedoms" just following Trump's move to tighten abortion restrictions.

Let's back up a minute. Under the Affordable Care Act — also known as Obamacare — President Barack Obama included a mandate that required employers to cover access to birth control. Many conservatives felt that this mandate encroached upon employers who were opposed to birth control, such as religious institutions. In the wake of the ACA's passing, there have been countless lawsuits by religious hospitals and non-profits fighting the mandate, because they believe that providing essential family planning tools to women makes them commit a "grave sin," as Slate previously reported.

On Friday, Trump basically absolved them of that potential "sin." Now, all employers have to do is inform their employees that they won't cover birth control, which 55 million use for family planning and an entire host of other medical issues. Companies just have to prove that they have "sincerely held religious beliefs or moral convictions" against it, according to The New York Times.

But what those religious and moral companies will do is cause more women to have unplanned pregnancies and abortions, which will also become harder to access under the rollback and potentially less safe as more health clinics are defunded. It's a blatant attack on women's health and livelihood. Talk about a moral conviction.

According to a 2012 study done at the Washington University School of Medicine in St. Louis found that when women had access to free birth control, the number of unplanned pregnancies and abortions fell between 62 and 78 percent, as NBC News reported on Sunday. That is huge, and shows that women are capable of, and have a strong desire, to plan when and if they want to have children. According to NBC News, Dr. Jeff Peipert, one of the study's authors, said in a statement at the time:

Ah, and that's the real kicker. Both sides of the choice debate claim to want to reduce the number of abortions. And it might be hard to believe, but pro-choice advocates aren't fans of abortion — they just want to ensure that women have autonomy over their own bodies and access to essential health care to keep them healthy.

Access to birth control achieves this goal, as research shows. Last year, the rate of abortions in the United States was the lowest it had been since Roe v. Wade was passed and the country had federal data to track. Most experts agree that this decline was likely due to the ACA's birth control mandate, as The Guardian reported.

So if the objective from anti-choice groups is actually to reduce the number of abortions, giving women access to birth control is the way to do it — hands down. Apart from simply lowering the number of unplanned pregnancies, birth control also helps women with a number of health issues, including endometriosis, which can jeopardize a woman's fertility. It seems especially cruel to take that away for any number of women who can't afford the often prohibitive costs of birth control and reproductive health care.

So if it's not about reducing the number of abortions, allowing women to plan their own families and exercise their human rights, or keep women healthy what is this about? It's about holding women, and lower-income women especially, down. It's about not allowing a woman to make a choice about her own body, even if it means more abortion or raising more children than she can afford or wants, introducing all sorts of possible socio-economic problems.

The data is clear: Affordable birth control means more freedom for women, their families, and their futures. And, considering what's been done thus far, it doesn't seem like those are things the current administration is interested in protecting.