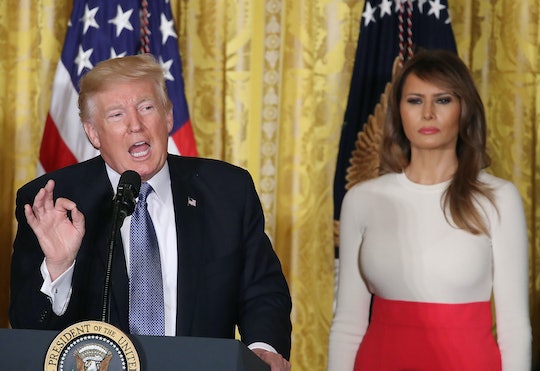 You can tell a lot about a relationship by the way two people communicate. I'm not just talking about what they say to each other; you could also deduce the status of a relationship by the way that their bodies interact. Words can be deceiving, but the body gives away your lies. And no couple exposes themselves more than the president and first lady, as accentuated by Tuesday night's State of the Union address. Curious what Melania and Donald Trump's body language means? Here's what the experts have to say.

Melania Trump forewent tradition on Tuesday evening and decided to ride in a separate motorcade from her husband to President Trump's first official State of the Union address in front of Congress, according to CNN. Stephanie Grisham, the first lady's communications director, told CNN in a statement that Melania headed to the event in a different car because she was "honoring her guests for the true heroes they are." (She invited Ryan Holets, a police officer from New Mexico, and 12-year-old Preston Sharp to sit with her in her first lady's box during the speech.) Grisham added that Melania accompanied them to the Capitol building, in addition to holding a White House reception, photo opportunity, and intimate meet-and-greet prior and after the speech.

Although it does seem logical that Melania would want to honor her guests by being beside them on the ride to the Capitol building, the action still raises eyebrows. That's because the body language between Melania and Trump has been fraught with tension throughout the years, and has been more so pronounced since Trump took office last year. Some people have interpreted Melania's decision to ride in a separate motorcade as a slight against her husband, particularly because, as CNN reported, the State of the Union was her first public appearance since the news about Trump's affair with adult film star Stormy Daniels broke earlier this month.

But that's not all. Her body language during the State of Union was less than enthusiastic, signaling that something was way off between the couple. Melania's facial expression would imply that she wasn't amused or happy, and her applause seemed performative rather than genuine. She also failed to stand along with other guests during a standing ovation, which had Twitter in an uproar.

So what do experts make of Melania and Donald Trump's body language? Nothing good, it would seem. Add Tuesday night to the list of curious interactions between the two, and you have a relationship that seems even more fractured than before.

Take the Great Hand Swats of 2017, for example. On multiple occasions, Melania has been caught on camera dodging Trump's attempts to hold her hand. Dr. Lillian Glass, a communications consultant, told Elle that the multiple hand swats show that "there is definitely some breakage in the relationship."

The times she has held his hand in public? They haven't done the couple any favors in terms of revealing a cordial relationship. In March of last year, when Trump, Melania, and their young son Barron Trump were walking to Marine One, the first lady cupped her husband's hand from underneath. Body language expert Patti Wood called the hand-hold "bizarre," telling Elle:

[She's] going in to interlace her hands with his, but he's giving her a fist, and he's refusing it with a fist, which a symbolic weapon. ... He's not even [holding her hand] to be that way in front of his son, to me that's significant.

Other experts have interpreted Melania and Trump's body language since he began his presidency, and the interpretations are rarely positive.