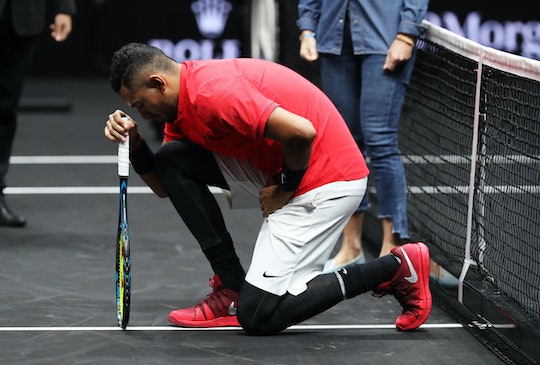 Throughout the past week, athletes across the United States have taken a knee in response to President Donald Trump's message that the NFL should fire players who chose not to stand during the national anthem, according to HuffPost. Although Trump's message defies what should be the core principles of America — free speech and the right to protest — some high schools are now banning players who don't stand for the national anthem.

If you've had enough stomach to pay attention to Trump's Twitter feed this week, you know that he's currently engaged in a war with the NFL in regards to the "take a knee" movement. Trump recently referred to any player who refuses to stand during the national anthem as a "son of a b*tch," according to The New York Times, and he has made repeated calls for the NFL to create a rule banning players from kneeling during the national anthem. To make things even more decisive, Trump has tried to portray the "take a knee" movement as an assault against America and its veterans, even though the "take a knee" protests are about combating racial injustice in America.

Unfortunately, it looks like some high schools in America are siding with Trump's stance on banning players who chose to kneel during the national anthem, despite the fact that this move would violate players' constitutional rights. One of the school districts supporting Trump's views is the Bossier School District in Bossier City, Louisiana.

The LHSAA (Louisiana High School Athletic Association) allows school principals to make decisions regarding students participation in the National Anthem while competing in athletic contests and games. Parkway High School requires student athletes to stand in a respectful manner throughout the National Anthem during any sporting event in which their team is participating. Failure to comply will result in removal from the team. Parkway High school is committed to creating a positive environment for sporting events that is free of disruption to the athletic contest or game.

OK, so there's a lot to dissect here. First off, how can the Bossier school district prove that taking a knee is disruptive to its athletic games? The "take a knee" movement is a form of peaceful protest that does not put anyone in danger or harm. Not to mention a "positive environment" is very subjective — wouldn't a a positive environment be defined as a place in which students are allowed to freely exercise their constitutional rights?

Second, there have been court cases disallowing public schools from punishing students who engage in peaceful acts of political protest. Frank LoMonte, the executive director of the Student Press Law Center, said, according to PBS: "public schools can’t discipline students for silent acts of political protest that don’t disrupt the operations of a school, like kneeling for the anthem or refusing to say the Pledge of Allegiance."

A legal example of this is the 1943 Supreme Court case, West Virginia State Board of Education v. Barnette. The Supreme Court found that students can't be forced to say the Pledge of Allegiance, as it would be a violation of free-speech.

Lastly, the Bossier school district must have a specific code of conduct addressing the act of kneeling during the national anthem at an athletic game. If you look at other states, like New Jersey for example, there is no rule dictating that New Jersey's public school students can't kneel during the national anthem, and therefore, public school administrators said they can't ban student athletes from games or their team if they choose to "take a knee." Janet Bamford, a spokeswoman for the New Jersey School Boards Association, said, according to NJ.com:

There is nothing in New Jersey statute, code or case law that specifically addresses . . . kneeling during the national anthem at football games.

If you work as a teacher or administrator in the public school system, you know that you have to abide by specific codes and policies before punishing a student. It's difficult to punish a student based simply on your opinion of what you think is right or wrong (this just happened in Florida, by the way), which seems to be the path Bossier's administrators are also taking.

Bossier Schools' Superintendent, Scott Smith, who oversees Parkway High School, said in a statement, according to the Shreveport Times:

It is a choice for students to participate in extracurricular activities, not a right, and we at Bossier Schools feel strongly that our teams and organizations should stand in unity to honor our nation’s military and veterans.

Hmm, it doesn't seem legally possible for a school to punish a student based on what it "feels" to be morally correct. All of the schools included in the Bossier school district are public institutions, and public institutions can't infringe on a citizen's constitutional rights, even if it concerns an extracurricular activity that is deemed a privilege or a choice. LoMonte told Education Week: "a school's authority to discipline students for silent anthem protests isn't heightened if those students are taking part in a privilege."

It goes withouts saying that Bossier Schools' national anthem policy is problematic when it comes to constitutional rights — regardless of whether you support the real reason behind the Take a Knee protests. The policy will likely mark a huge turning point in the Take a Knee protests at the public school level — and it could have ripple effects for students' future rights to protest, even silently, issues of racial injustice.