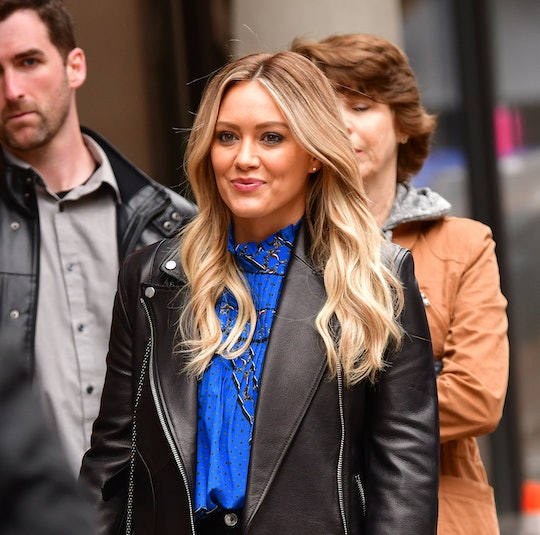 After confronting a strange man caught taking pictures of her children playing football at a park, Hilary Duff has called for changes to photography laws. The Younger actress and mother of two shared a video of the confrontation on Instagram and argued that parents should legally be allowed to control when and where their minor children are filmed or photographed, even in public places like a park.

"Laws need to change," Duff wrote in the caption of her video. "This is stalking minors! Disgusting!" In the video, Duff approaches an unidentified man seen snapping photos with a professional grade Nikon camera. As she approaches, Duff can be heard asking who he is here with. "I'm here with me," the man responds.

"Do you know any of the people on the team?" Duff asks, referencing the children's sports teams.

When the man replies that no, he doesn't know any of the children or parents associated with the teams, Duff asks him to "stop taking pictures of the kids, please."

The man then tells Duff she "shouldn't feel uncomfortable" and offers to show her his ID. "I'm not asking for your ID, I'm asking you to stop taking pictures of our 7-year-old children if you don't know anyone that's here."

Despite Duff's pleas to practice his photography elsewhere, the man maintains that what he's doing is not against the law. "Your paranoia is unwarranted," the man said.

When Duff alerts him to the fact that she's been filming him and plans to post the video to her social media to let people "how creepy it is that this is what you're choosing to do on your Saturday morning," the man moves to block her camera.

Although Duff had initially said she thought the man was paparazzi, she later admitted in her Instagram Story that she isn't "100%" sure he was. Still, she said that after she noticed him taking pictures, she asked parents on both teams if they knew him and no one did. "It's extremely strange and inappropriate and creepy to have a man photographing our 7-year-old children and [for] that to be completely legal," she said on her Instagram Story. "If a parent is asking for it to stop, the laws should be changed for you to not to be able to photograph that person if they're a minor."

Duff added that while she could understand if a person was out taking pictures and children just happened to be in the background, it's a different story when they appear to be the main focus. "If those kids are a subject of your photography practice ... and [their parent] asks [you] to please stop that, [the parent] should have that right," Duff said. "We really need to work on changing that law. We should be able to, as parents, make that choice for our 7-year-old not to be filmed when we feel that it's invasive to them and inappropriate."

While celebrities like Duff have begrudgingly accepted the fact that their fame leaves them with little privacy when out in public, they're more protective when it comes to their family. In fact, a number of them commented in support of Duff's call for legal reform.

"This is infuriating," actor Busy Philipps wrote. "I know it's illegal for an adult not with a child to be inside a playground — how is taking pictures of children without parents' consent legal?"

Shameless alum Emmy Rossum agreed, adding that, "Children should be protected under the law."

"The bottom line is this industry should not be allowed to make money off of children," Reed wrote. "Not only is that morally wrong, but more importantly, in the process of making money off of little kid's private moments, these children grow up feeling unsafe. Having strange men lurking around corners, hiding behind cars and trees and showing up at your football practice or waiting outside your home when you are too young to process what is happening has psychological ramifications and should be without a doubt illegal."

Celebrity gossip blogger Perez Hilton also voiced his support for keeping children off limits. "I don't run any paparazzi photos of celeb children on my site," Hilton commented. "Every media outlet should agree to do the same."

While there are no laws against photographing people — including children — in public, celebrities in California may actually have legal recourse to stop photographers from snapping pictures of their kids. In 2013, the state passed a law that deems "any person who intentionally harasses the child or ward of any other person because of that person’s employment" guilty of a misdemeanor punishable by up to a year in jail and or a $10,000 fine. Under the law, harassment is defined as anything that "alarms, annoys, torments, or terrorizes" a child and occurs "during the course of any actual or attempted recording of the child’s or ward’s image or voice, or both, without the express consent of the parent or legal guardian."

Although this isn't the first time Duff has confronted someone for photographing her children — her last confrontation with paparazzi occurred in December, according to Yahoo! News — it's unclear if she'll take her complaint to legislators.

More Like This
Kim Kardashian Didn't Introduce Pete Davidson To Her Kids Until 6 Months Into Dating
Jennifer Hudson Is A Proud Mom, An Accomplished Artist, & Now An EGOT Winner
Janet Jackson's Son Eissa Is A Little Musical Prodigy In The Making
Princess Charlotte Got So Excited To Shake A Royal Fan's Hand