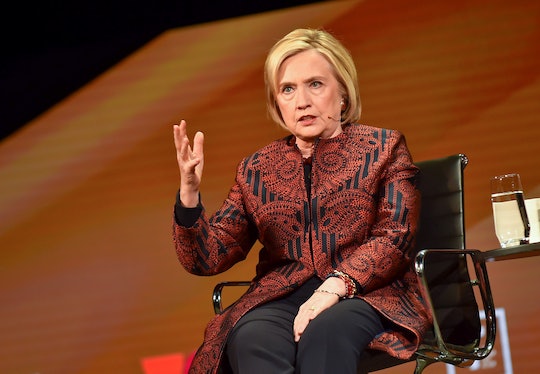 Hillary Clinton Has Some Very Strong Feelings About The Immigration Crisis

If you thought you were upset about the separation of families seeking asylum at the United States border, just wait until you see the emotional response the former Secretary of State had on the topic. In one of the more powerful moments at the 2019 Women In The World Summit in New York City, Hillary Clinton took the stage for about 45 minutes to discuss politics, social issues, and the future of women in leading roles. But out of everything she touched on, it was Hillary Clinton's response to the immigration crisis that really struck a chord with the audience.

Throughout Clinton's panel, which was actually announced at the very last minute as a surprise for the WITW attendees, she tackled many important topics. With CNN's Fareed Zakaria leading the conversation, Clinton spoke about things like the Mueller report, the handful of already announced presidential candidates for the 2020 election, and, as previously mentioned, the immigration crisis. Though Clinton was expressive as she shared her truth on these topics, it was immigration that had her riled up — so much so that she had to pause more than once.

Oh, and as you'll see by watching the video below, Clinton might have just solved the crisis in under five minutes. That is, of course, if someone (ahem, POTUS) were to put her advice and ideas into motion.

"What is asylum? Asylum is a request by a person who, under our law, has the right to come and say there are reasons why I can not stay in my home country. I am seeking asylum," Clinton explained to the audience inside the David H. Koch Theater at Lincoln Center. She delivers this information so matter-of-factly that it's hard to believe anyone in a leadership position wouldn't have thought of this themselves. Clinton added that asylum cases are resolved "by eventually having somebody appear before an immigration judge to have their case heard. Now if you really wanted to solve this problem you would double — you would quadruple — the number of immigration judges. You would hire more people, you would send them to the border, you would begin to organize a system so that people could be quickly processed in a legal and humane way. You would not be separating families and putting babies in cages."

It must be noted that Clinton put significant emphasis on the words "legal" and "humane." She then paused briefly after making the above statement as the audience cheered, allowing a moment for the former First Lady to collect herself.

For people who want to deny there's a problem or people who don't want to solve the problem but want to use it as a political issue, they're both, in my view, failing.

Clinton's plan of attack on solving the immigration crisis did not end there. She continued, explaining that if she were president, she would have gone "to the big tech companies" and asked them to build a system that would allow her administration to keep track of all of the refugees seeking asylum. "I'm not going to lose anybody. No baby, no older person," Clinton promised, which led the audience to even more supportive roars. The New York Times reports that at least 3,000 children have been "forcibly" separated from their families at the United States border.

Without having to say Donald Trump's name, Clinton made it clear that she did not believe he was actually trying to resolve the immigration issue. "That is what someone who wanted to solve the problem would be doing as opposed to either denying it or politicizing it," Clinton concluded. "And thats' what I hope will eventually be done."

I could be wrong, but I'm pretty Clinton isn't referring to building a wall.

More Like This
Chris Evans Has Choice Words For Critics Of The Same-Sex Kiss In 'Lightyear'
Obamas Issue Powerful Statements After Supreme Court Ends Roe v. Wade
Keep Talking To Your Kids About Abortion — It's More Important Than Ever
This Map Illustrates Just How Many States Would Ban Abortion If Roe V. Wade Is Overturned