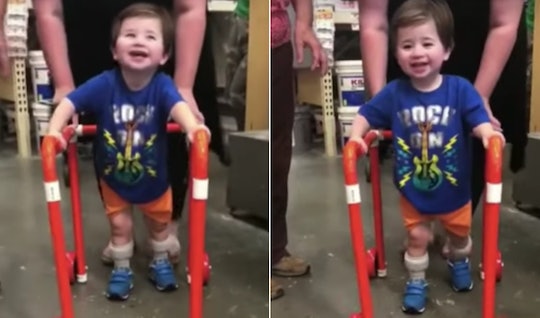 It's difficult to imagine what it would be like to have a 2-year-old who was struggling to walk because of a condition and you weren't sure if your insurance would cover what he needed to help him. This was the case for Georgia couple Christian and Justin Moore and their little boy Logan. According to CNN, they were trying to come up with a solution to help Logan when help arrived in the most surprising of places: their local hardware store. After hearing about this family's predicament, a group of workers at Home Depot built the young boy a walker out of the goodness of their hearts, and it was honestly just a lovely moment for humanity.

Christian and Justin Moore were visiting the Cedartown, Georgia Home Depot with a specific DIY job in mind. According to CBS News affiliate WKYT, their son Logan needed a walker. The couple told CNN that Logan had been diagnosed with hypotonia, which is a condition that leaves infants with decreased muscle tone and creates barriers with stability, according to Boston Children's Hospital. This naturally makes walking difficult for the little boy, and, as CNN reported, his parents were told by their family doctor to get Logan a walker to help support him.

Unfortunately, they were unsure whether or not this walker would be covered by their insurance plan, so they did what so many of us do in times of panic: they looked to YouTube for a temporary do-it-yourself version.

The couple found a video tutorial on how to make a walker out of PVC piping and went to Home Depot to pick up the supplies, according to WGAL. When they told employees what they were looking for and why, Christian told CNN they were surprised at the employees' response. "They started getting the parts together and told us they would put it together and would not charge us for it," Christian told the news outlet. "They told us to go get ice cream and come back in an hour."

When the surprised couple returned to the store they found the employees had built Logan a walker out of PVC and even put his name on it — at no cost to them, according to ABC 13 News.

I think the smile on Logan's face as he checks out his new walker says it all.

Jeffrey Anderson, one of the Home Depot employees who helped Logan and his family, took to Facebook to share a post about the heartwarming experience. "Everyone was crying to see Logan walk around with the biggest smile on his face and when the family tried to pay us we said no way this one is on us," Anderson wrote on Facebook. "Thank to all that help and for being a blessing to this family and to this little guy."

This is one of those stories that could have turned out so much sadder. A family can't get a walker because health insurance doesn't cover it. They struggle, they feel alone, their son has a tough time getting mobile. Instead, it's a lemonade out of lemons kind of story. People worked together to make sure a little boy could get around. To make sure a family didn't feel alone. And if that's not beautiful, I don't know what is.