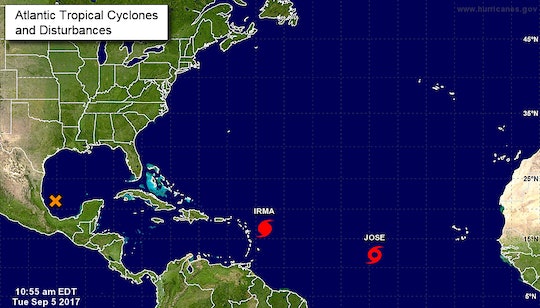 As east Texas and Louisiana recover from the devastation of Hurricane Harvey, both south Florida and Puerto Rico have been preparing for the potential arrival of Hurricane Irma this week — a Category 5 storm with winds already in excess of 175 mph. Before Hurricane Irma has even made landfall, the National Hurricane Center issued an alert for Tropical Storm Jose, forming out over the Atlantic on the heels of Irma. How dangerous is Tropical Storm Jose? The 10th tropical storm of the season is currently located approximately 1,500 miles east of the lesser Antilles in the Caribbean and moving west at 13 mph, according to the National Hurricane Center — but don't let its distance or seemingly slow progression fool you.

A tropical storm is an intensity rating given to a cyclone before it becomes a hurricane, and it has maximum sustained winds of up to 63 mph. But, as both Hurricane Harvey and Hurricane Irma have already shown, tropical cyclones can intensify quickly — Harvey rapidly went from a Category 3 to 4 just hours before making landfall — and Jose isn't expected to remain as just a tropical storm. According to Good Morning America, Tropical Storm Jose could intensify to a Category 2 hurricane by the end of this week.

What's particularly concerning to meteorologists is that even though Jose is only just a tropical storm now, it's likely to intensify into a hurricane, and, worse, could impact the very same areas under a hurricane warning from Hurricane Irma — and this is even without an official prediction of exactly where Irma will make landfall. Hurricane Irma is expected to hit the Caribbean, with Puerto Rico, the U.S. Virgin Islands, and nearly a dozen other Caribbean islands under a hurricane warning as of Tuesday afternoon.

And if a potential Hurricane Jose wasn't enough, another area of meteorological concern is brewing in the southwestern Gulf of Mexico. Currently, forecasters are keeping a close eye on weather activity near Veracruz, Mexico — if conditions intensify, Jose could be followed by Katia, which would become the 11th named storm of the season, according to AccuWeather. Even though hurricane season officially started on June 1, August and September are typically when the season peaks, so it's no surprise that we're up to Jose and possible Katia on the hurricane naming chart.

Meteorologists are also worried about intensity of the storms this particular hurricane season. Climate change may not have directly caused Hurricane Harvey or Irma, but it certainly made them much worse and more destructive. And given how quickly both Harvey and Irma intensified, it makes keeping an eye on Tropical Storm Jose all the more important, as areas that are already stretched thin by preparing for Irma could very well be hit by Jose, too.