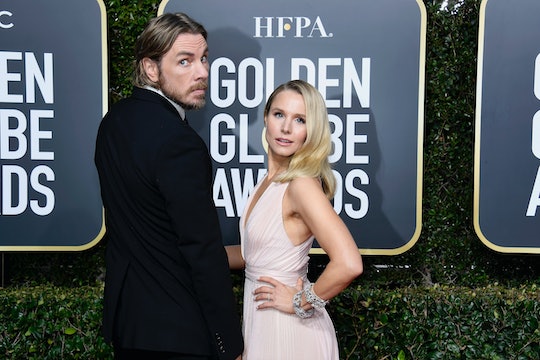 With one ill-timed emoji, Dax Shepard accidentally flirted with Kristen Bell's mom over text recently. But, luckily for all involved, it sounds like the actor narrowly avoided an awkward family dinner with his mother-in-law.

According to Bell's telling of the hilarious mishap, the Armchair Expert podcast host, who shares two daughters with his wife of six years, recently sent his mother-in-law, Lorelai, a text with the, umm, suggestive eggplant emoji. As Bell shared with Ellen DeGeneres during a recent appearance on The Ellen Show, her mother was coming to town for a visit and sent Shepard a text letting him know she was on her way, to which her son-in-law responded, "Can't wait to see you tonight." But it didn't stop there.

Fortunately for everyone, Bell told DeGeneres that her mom "didn't know what the eggplant emoji was" — according to an official definition from Dictonary.com, it signifies a penis — so a super awkward situation was averted.

Not that either Bell or Shepard are all that shy about dealing with awkward situations. Back in 2017, for example, Shepard revealed during an interview on Jimmy Kimmel Live! that their kids walked in on them when they were having a little adult moment, though it could have been much worse.

"They didn't walk in while I was, like, pounding mom," Shepard explained to Kimmel at the time. "We put on the TV in the living room. We're bad parents. And then we stole away for a minute — afternoon delight. But we were just under the sheets, and they walked in, and it was more just explaining why we were taking a nap in the afternoon while they were on the loose... it wasn't full coitus interruptus."

Eggplant emoji mixups and afternoon delight mishaps, this is why Kristen Bell and Dax Shepard are all around relationship goals.

More Like This
Kristen Bell Just Hinted That 'Frozen 3' Is Maybe (Hopefully!) In The Works
Princess Charlotte Got So Excited To Shake A Royal Fan's Hand
Janet Jackson's Son Eissa Is A Little Musical Prodigy In The Making
Prince George Hosted A “Little Cake Sale” For One Of His Dad's Favorite Charities