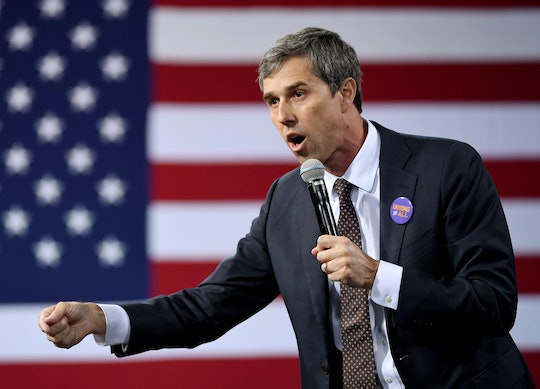 A month after presidential hopeful Beto O'Rourke, a Democrat, announced his 2020 campaign, he unveiled his first policy proposal Monday, April 29. The $5 trillion idea addresses climate change, a top issue for parents who are worried about their child's future. But how does Beto O'Rourke's proposed climate change policy actually work? The detailed plan involves reversing decisions made by President Donald Trump, taxes on the wealthy, and increased investment in infrastructure, to name a few points.

Massachusetts Sen. Elizabeth Warren, another presidential contender, has introduced numerous detailed policy proposals since launching her campaign in February. From universal childcare to affordable housing, Warren has set herself apart from her competitors in regards to action-based ideas. Other politicians in the race are now playing catch up, including O'Rourke, who revealed his first policy proposal on Monday via his website.

"The stakes are clear: We are living in a transformed reality, where our longstanding inaction has not only impacted our climate but led to a growing emergency that has already started to sap our economic prosperity and public health — worsening inequality and threatening our safety and security," O'Rourke pens in his introduction to the proposal.

The former Texas congressman's plan is a "four-part framework" that will "mobilize a historic $5 trillion over 10 years" to achieve "net-zero emissions by 2050," according to his website.

The 2050 deadline is key here — to limit global warming to 1.5 Celsius, or 2.7 degrees Fahrenheit, it "requires bringing the globe's net greenhouse emissions down to zero" by this year, according to NPR. And given that this deadline is quickly approaching, there needs to be a plan to address this issue STAT.

A plan to save the world from endless natural disasters and disappearing resources is necessary (the biggest understatement in history, I know), but how will O'Rourke be able to bring his ideas to fruition? That's where his four-part system comes in.

The first step, as noted on O'Rourke's website, is to take executive actions on his first day as president. The candidate would re-enter the Paris climate agreement that Trump left in June 2017, and he would enforce a "net-zero emissions by 2030 carbon budget for federal lands," for example.

Other ideas include requiring federal permitting to consider "climate costs and community impacts" and to "strengthen the clean air and hazardous waste limits for power plants and fuel economy standards."

As for step two? O'Rourke says he'll "launch a 10-year mobilization of $5 trillion directly leveraged by a fully paid-for $1.5 trillion investment funded with the "revenues generated by structural changes to the tax code that ensure corporations and the wealthiest among us pay their fair share," according to CNBC.

With this money, O'Rourke will invest the funds in "performance-focused climate change tax incentives," "research with the most promise to dramatically and rapidly achieve net-zero emissions," and multiple grants that will inspire communities to get involved in the process.

The next part is to get net-zero emissions by 2050. To do so, O'Rourke — in addition to the proposals he already outlined will support conservation efforts, hold polluters accountable, and set measurements for progress.

The last step is to amp up pre-disaster efforts to best protect communities, like expanding the federal crop insurance program and investing in "risk reduction measures."

“We’re glad to see Beto release a climate plan as his first policy and commit to making it a day one priority for his administration. He gets a lot right in this plan,” Varshini Prakash, the executive director of The Sunrise Movement, said in a statement, according to The Hill.

Unfortunately, Beto gets the science wrong and walks back his commitments from earlier this month in Iowa to move to net-zero emissions by 2030. Beto claims to support the Green New Deal, but his plan is out of line with the timeline it lays out and the scale of action that scientists say is necessary to take here in the United States to give our generation a livable future.

Whether you agree with O'Rourke's plan or back the Green New Deal, one thing is clear — the United States needs to work alongside other stakeholders to address climate change, and this issue should be a high-priority conversation among the 2020 presidential contenders.