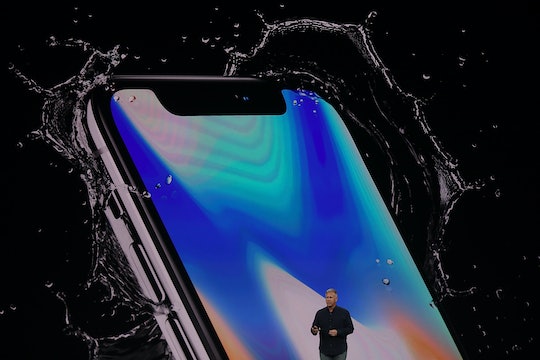 The iPhone X *Should* Have A Longer Battery Life

Ever since the iPhone X was unveiled yesterday, the world has been obsessing over Apple's latest and greatest gadget. People have already become acquainted with attractive features like animoji and facial identification — but some people are wondering whether all those fancy features will simply drain their iPhone's power within a couple of hours. Because while technological advancement is cool, so is having a charged phone. So, neat features aside, just how long does the iPhone X battery last?

Good news for those jonesing to get their hands on the new device: according to Apple, the battery life on the iPhone X lasts up to two hours longer than the iPhone 7. Unless you've used an iPhone 7 before, that comparison probably doesn't tell you much, though. Apple's tech specifications for the iPhone 7 claimed that the phone could stay powered for up to 14 hours of talk time on 3G and up to 12 hours on LTE or 3G, so realistically, the iPhone X could outlive those specs by up to two hours.

Real-life use of the iPhone 7 hasn't been quite as generous in its descriptions of the phone's staying power, however. TechRadar called the phone's power performance "a really poor battery experience," while another tech writer wrote that the iPhone 7 had "the shortest battery life" he'd experienced "on any mainstream phone" in recent years.

So really, it's a good thing that Apple is planning on boosting the iPhone X's battery life.

There are a few other changes coming to the iPhone X charging experience, as well. Not only will it boast a (hopefully) longer battery life, but users will be able to speed-charge their devices using USB-C, which will take battery life from zero to 50 percent charge in just 30 minutes. (As an Android user who already has USB-C super-charging in my life, I can confirm that yes, it is an absolute game-changer, and yes, you're going to love it.)

One thing to note about the USB-C charging capability, however, is that you'll need to purchase an extra USB-C to lightning cable in order to take advantage of it, according to 9to5Mac. While some won't be happy about paying extra for this perk, most people will probably be fine with shelling out an extra $49 to $79 in order to be able to quickly top up their phone's juice.

Apart from the introduction of USB-C, Apple is also doing its best to push wireless charging into the mainstream with the iPhone X. The iPhone X's glass back will allow it to charge wirelessly on Qi wireless chargers and Apple's new AirPower mats, which will let users charge up to three compatible Apple products simultaneously.

Personally, I'm curious to see what reviewers say of the iPhone X's battery life once the new smartphone begins shipping in early November. The $999 iPhone comes with some pretty impressive extra features, from animated emoji (ahem, sorry, animoji) to facial identification to a bigger, sexier screen. Many of those features are pushing today's phone boundaries, but they don't seem like they would be exactly kind to battery life.

That said, if the iPhone X manages to keep up with fans' power expectations while also bringing some stellar tech advances to the table, it'll definitely be easier for customers to swallow its hefty price tag. (Who knows? I might even look at converting back to my old iPhone ways.)

If you're ready to be one of the guinea pigs who get their hands on some of the first iPhones, pre-ordering opens up to customers on Oct. 27. The first iPhone Xs will then be shipped on Nov. 3.