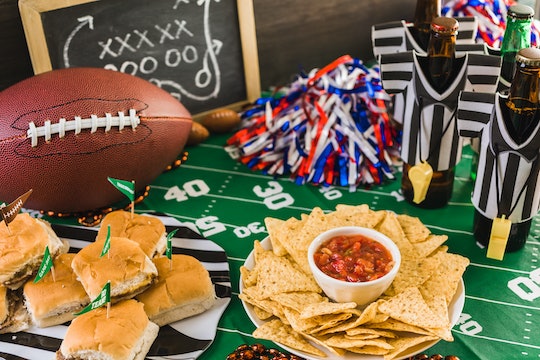 The San Francisco 49ers will face off with the Kansas City Chiefs at Super Bowl LIV tonight. And as audiences across the country are tuning in for football's biggest night, parents of young children will likely be wondering how long the Super Bowl is. Or in other words, do I need to get a babysitter for that Super Bowl party or is the game short enough to bring the kiddos along? The short answer: leave them at home, you're in for a long night.

The Super Bowl kickoff on Sunday, Feb. 2 will be at 6:30 p.m. ET from Hard Rock Stadium in Miami Gardens. The average professional football game lasts a little over three hours, according to ESPN. But the Super Bowl isn't just any football game, so the runtime is a bit longer. When you take into consideration the halftime show — which runs about 30 minutes, per Newsweek — the Super Bowl lasts about 3 hours and 44 minutes.

With the game starting at 6:30 p.m. ET and lasting nearly 4 hours, it realistically won't end until after 10 p.m. — long after most little kids' bedtimes. If you're watching the game at home, putting your littles to bed during the game couldn't be easier. But for the 1-in-7 Americans who attend Super Bowl parties outside of their homes, as research from YouGov shows, a babysitter is certainly in order.

Even if you're not a football fan, this year's Super Bowl Halftime Show is set to be quite the performance. Shakira and Jennifer Lopez will join forces to perform a mix of English and Spanish hits during the break. The pair announced their plans to perform in September 2019 and fans have been anxiously awaiting their appearance ever since.

And the set of Super Bowl commercials airing during the big game — some of which have already been leaked and look awesome, by the way — are another draw for viewers less interested in the football of it all. No matter why you're watching, the game, commercials, and halftime show will add up to a roughly four-hour commitment that may last a bit too long for the kids to hang.