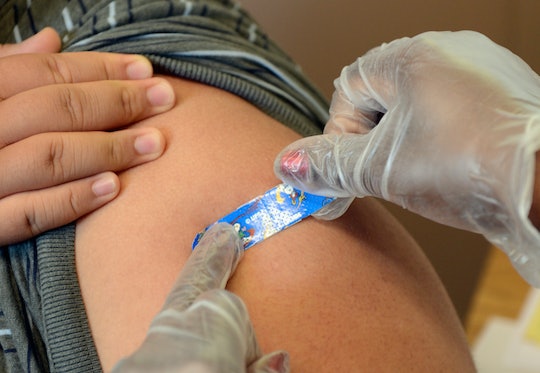 Nothing is worse than seeing your child sick, which is why many parents are vigilant about making sure their children are vaccinated against preventable diseases and illnesses, such as whooping cough. But how often do they need those important vaccines? Or, more specifically, how long is the whooping cough vaccine effective? According to a new study published in the journal Pediatrics, this vital shot does become less effective over time, so it's important to stay on top of your child's vaccination schedule to ensure they are protected.

Guidelines from the U.S. Department of Health and Human Services (HSS) call for five doses of the DTaP vaccine, which inoculates a child against diphtheria, tetanus and pertussis, the name for whooping cough. According to the HSS, the vaccinations are supposed to be given at two, four, and six months of age, then 15-18 months and finally at 4 to 6 years old. And this new study shows, as CNN reported, that missing just one dose can result in an up to five times increase in the susceptibility of getting whooping cough.

The new study, published on Monday, is the work of researchers from Kaiser Permanente Northern California (KPNC). “As the time since the last dose increased, so did the risk of pertussis. Among vaccinated children ages 19 months to under 7 years, the adjusted risk of pertussis three or more years after vaccination was five times higher than the risk less than a year after vaccination," according to the study's abstract.

For children ages 7 to 11 years, the risk was twice as high six years after the last vaccination than three years, according to Pediatrics.

The important thing to note though is that the vaccine does work, as CNN reported. The study found that for unvaccinated children, the risk of contracting the illness was 13 times higher than the vaccinated population.

As study co-author Nicola P. Klein, M.D., Ph.D., FAAP and director of the Vaccine Study Center at KPNC, said of the research:

While the pertussis vaccines don’t last as long as we would like, they do work and they are effective. So both families and providers need to understand it continues to be very important to make sure all infants and children are vaccinated with all doses of the pertussis vaccine and on the recommended schedule.

Why is whooping cough concerning? It’s a highly contagious disease that, early-on, mimics the common cold, according to the Mayo Clinic. Symptoms include a nasal congestion, a runny nose, watery eyes, fever, and cough. But after several days symptoms worsen and include thick mucus that clogs the airways. That leads to uncontrollable coughing that is hacking or ends in an intake of air that has a “whoop” sound.

Since the vaccination appears to wear off over time, you might be wondering why that’s not a concern for adults. That’s because the highest rate of complications for whooping cough is among children, according to the Mayo Clinic. In infants under 6 months, as the Mayo Clinic detailed, complications from whooping cough may include an increased risk of coming down with pneumonia, slowed or stopped breathing, dehydration, seizures, and even brain damage. Teens and adults generally recover from whooping cough and suffer "milder" symptoms especially if they've been vaccinated, according to the U.S. Centers for Disease Control and Prevention.

The bottom line is, the vaccination isn’t perfect in that it’s not protection for life. But it’s infinitely better than not being protected at all. With this knowledge in mind, be sure to check your child’s vaccination records and confirm they’re protected. And if you have questions or concerns, always reach out to a trusted medical professional for guidance.