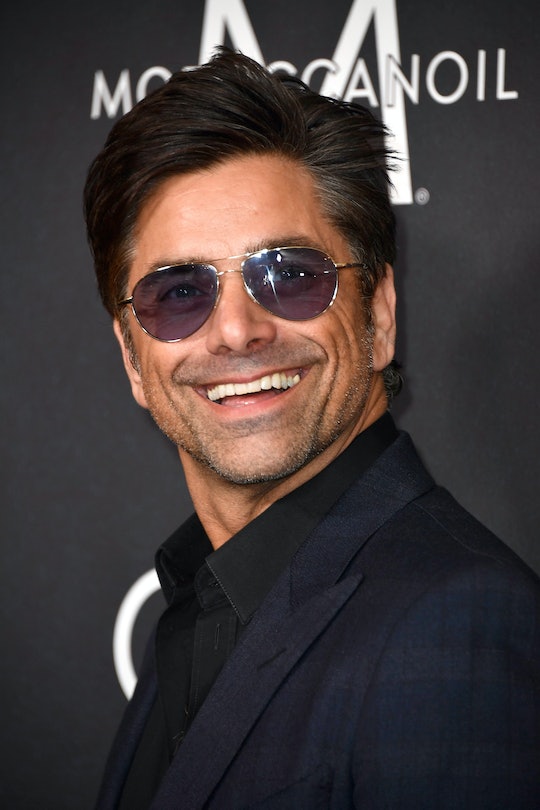 Here's How To Get Your Uncle Jesse Fix From 'Fuller House'

If you're like me, you've had your favorite characters from the original version of Full House. I always wanted to be D.J. (Candace Cameron Bure), but seemed to somehow fit more like Stephanie (Jodie Sweetin). but the biggest reason I always watched was for the hunk of burning love, Uncle Jesse (John Stamos). With the Fuller House reboot four seasons in, there's going to be more Uncle Jesse (yay!). So, how many episodes of Fuller House is John Stamos in?

Welcome aboard, Stamos fans — according to the IMDB page that lists all cast members and episodes they've appeared in, Uncle Jesse has appeared in 11 episodes of Fuller House so far. He is, of course, one of the four main adult stars of the hit '90s show alongside Bob Saget (Danny Tanner), Lori Loughlin (Becky Katsopolis), Dave Coulier (Joey Gladstone), all of whom are returning to the iconic San Fransisco Tanner home (well, on set), for more hijinks and Fuller House comedy you've come to love and expect. That's right, you'll see more John Stamos in Season 4 of Fuller House and there's really only one thing to say to that: "Have mercy."

If you need all the nitty gritty details about every episode Stamos has appeared, let me be the one to bless your day. It all began (again back in 2016 with "Our Very First Show, Again," with the whole Tanner crew reuniting before the family house is sold. (They didn't end up selling the house). Next up in Season 1, Uncle Jess appeared in "Moving Day" which is, of course, supposed to be about moving out of the house. Bittersweet but a cameo from Stamos is a good episode, indeed. His third visit to set was in "War of the Roses," when Stephanie, D.J., and Kimmy have to figure out who sent 1,000 roses that arrived without a card. Next up was "Love Is In the Air" where the coolest Aunt and Uncle of the century renewed their wedding vows, then "Fuller Thanksgiving" which is self- explanatory, "Glazed and Confused" where the adults take a fun trip, and Season 2's "Happy New Year, Baby" with yet another solid cameo from the original Dude (Stamos, obviously).

In Season 3, our darling Uncle appeared in "Uncles Jesse's Adventures in Babysitting" and "Here Comes the Sun." One is full of Stamos and kids and the other is just enough Stamos during an '80s-themed party and then there's a fast forward all the way into episode 10 from the same season in "My Best Friends' Japanese Wedding." It's worth the wait. Trust me. Episode 17 from Season 3 marks the 30-year "Dadiversary" in "Fullers in a Fog" between Uncles Jesse, Danny, and Joey.

As you can see, there are plenty of opportunities to catch your favorite Uncle on Fuller House. It doesn't matter if you indulge in Season 1 or the upcoming Season 4. And really, if you want to pay your full respects, go all the way back to Full House and appreciate all the John in all the glory. The dude just seems to get better with time, TBH.

After experiencing a traumatic c-section, this mother sought out a doula to support her through her second child’s delivery. Watch as that doula helps this mom reclaim the birth she felt robbed of with her first child, in Episode Three of Romper's Doula Diaries, Season Two, below. Visit Bustle Digital Group's YouTube page for more episodes, launching Mondays in December.