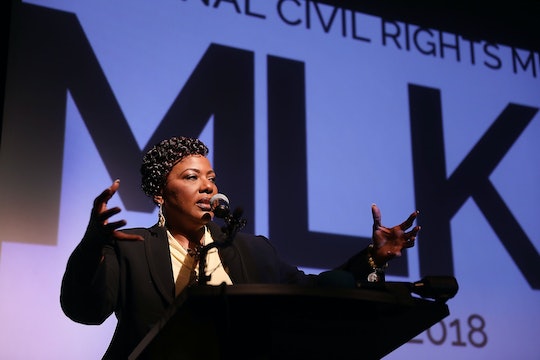 How Martin Luther King Jr.'s Children Have Followed In His Footsteps

When social activist and civil rights leader Martin Luther King Jr. was assassinated on April 4, 1968, he left behind a sea of grieving supporters and a loving family. And in light of today's anniversary, it's fair some people are curious about how many kids Martin Luther King Jr. has and how they've carried on his legacy.

King departed this earth as the father of four kids: Martin Luther King III, Bernice King, Yolanda King, and Dexter King. Bernice reminded the public of this fact on Thursday, when she took to Twitter to share a worn family portrait of the late Baptist minister with his wife, Coretta Scott King, and their four kids.

"Tattered, but fitting, photo," she captioned the moving photo. "A family who was robbed of a father and husband by white supremacy, racism, hate, apathy, opposition to economic justice and gun violence. These evils persist. But I just don’t believe it’s over. We still can get to that 'Promised Land.' Let’s go."

Bernice's photo is a reminder that, in addition to King's impressive life's work, he was a father. A safe place, role model, and grounding force in his kids lives. The list goes on and on.

Of course, Bernice and her siblings are no longer the little kids in that weathered picture. Michael is 61, Dexter is 58, and Bernice is 56. As for Yolanda, she died in 2007 at age 51, according to The New York Times.

So, where are King's children today? As it turns out, all three of his surviving children are working towards his vision of equality for all people.

Bernice is a minister and the CEO of the King Center, an "educational and social change institution," according to its website.

What I didn’t want to be is a mini-Martin Luther King Jr., in the sense that I was just spouting out these things from my head. I wanted them to be a part of my heart. I had to discover me first, so that if I adopted any of him, it would be genuine and it wouldn’t be something that I was just doing because I heard it or because it was just the right thing to do. I believe and subscribe to these things from the depth of my soul.

Makes perfect sense. Many children of famous and powerful people grapple with their personal identity before forging their own path.

Michael, King's namesake, also is civil rights leader and activist. He gave a speech at the U.S.-Mexico border in August 2018, stating in part, according to KGTV San Diego: "This border wall behind me has become a symbol of hate and division. It leads to the separation of children from their parents, endangers border communities and takes the lives of people in search of safety and freedom."

Michael's young daughter, 9-year-old Yolanda, is just as inspiring. MLK's 9-year-old granddaughter spoke out against gun violence at a March for Our Lives event in 2018, telling the crowd, according to ABC News: "I have a dream that enough is enough."

Last but not least is Dexter, civil rights activist and chairman of the Martin Luther King Jr. Center.

He's also an outspoken vegan, explaining, according to Mercy for Animals: "Veganism has given me a higher level of awareness and spirituality. If you're violent to yourself by putting things into your body that violate its spirit, it will be difficult not to perpetuate that onto someone else."

It's also important to recognize Yolanda, who was a powerful LGTBQ rights activist alongside her mother, Coretta, before her untimely death.

“My father said it on numerous occasions, ‘Injustice anywhere is a threat to justice everywhere.' If we exclude and discriminate against any group of people it affects us all, and it’s really that simple," she once said, according to HuffPost. "The civil rights movement that I believe in thrives on unity and inclusion, not division and exclusion.”

In the 51 years that have passed since King's death, his four children have upheld his legacy in transformative ways. And each King sibling brings a unique and layered perspective to the fight for equality in America.

More Like This
Chris Evans Has Choice Words For Critics Of The Same-Sex Kiss In 'Lightyear'
Raising Anti-Racist Kids: Imara Jones
I Started a Magazine for Gay Parents in 1998. Here's What's Changed Since Then.
10 Of The Raddest Movies From The '90s To Watch On Girls Night