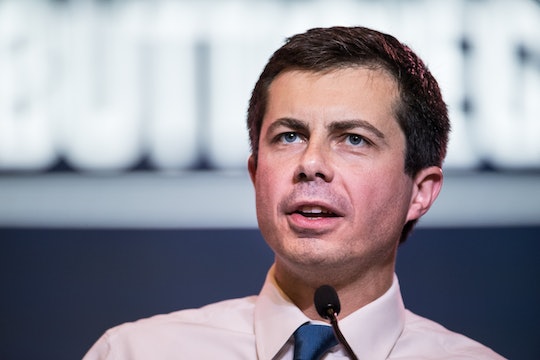 If you tuned into night one of the 2020 Democratic debate, then you probably noticed several candidates alternating between Spanish and English. Going into night two, viewers were already betting on who would be the first to use a foreign language — and it turns out Mayor Pete was the guy. But how many languages does Pete Buttigieg speak?

On Thursday, June 27, the second group of 10 Democrats took to the debate stage. And the mayor of South Bend, Indiana, didn't waste any time highlighting his multi-lingual abilities. As CNN reported, Telemundo's José Díaz-Balart welcomed Mayor Pete in Spanish before asking his question. Buttigieg immediately responded in Spanish with, "Good evening. Thank you."

According to The Atlantic, though, that's not the only language he speaks in addition to English. Not by a long shot. That's because Buttigieg has been reported to speak anywhere between six and eight different languages, depending on the day and publication. When The Atlantic reached out to Mayor Pete's campaign in April, he was credited with knowing: English, Norwegian, Spanish, French, Italian, Maltese, Arabic, and Dari. Impressive, right? (It makes the limited French I know look pathetic in comparison.)

This isn't the first time the public has had the opportunity to marvel at his language abilities. Time writer Anand Giridharadas tweeted about a time when Buttigiege was introduced to his Norwegian friend (who is a reporter), and Mayor Pete simply started speaking to her in her language.

With this in mind, I'm guessing plenty of viewers probably had Buttigieg pegged as one of the most likely candidates to bust out the Spanish on Thursday. One person tweeted, "If you had Pete Buttigieg as the first candidate tonight to speak Spanish: You win."

Another Twitter user wrote, "Buttigieg speaking Spanish is a huge boost to my #DemocraticDebate Bingo card."

Yet another Twitter user compared Buttigieg's knack for language to that of two other Democratic candidates who spoke in Spanish on night one of the debate. "Beto: I can speak fluent Spanish ;) Booker: Not so fast buckaroo. Buttigieg: hold my polling numbers..." This Twitter user also shared a compilation of Mayor Pete answering interview questions in various languages.

Others compared Buttigieg's intellect and skills to that of President Donald Trump. Spoiler alert: Trump isn't really into foreign languages. (I know, huge shock there.) Back in March, one Twitter user wrote, "South Bend mayor Pete Buttigieg, candidate for the Democratic nomination for president, speaks Norwegian, Spanish, Italian, Maltese, Arabic, Dari, and French. He's a Rhodes Scholar, an Afghan veteran, a concert pianist.... Mean while:" and then included a link to a Newsweek headline that read, "Trump accidentally hit his head with a golf club, asked if caddy did it: report." (LOL. Yep, that's about right.)

If Pete Buttigieg were to win the Democratic nomination — and then go on to beat Trump at the polls — his impressive language skills would undoubtedly serve him well. And I'm sure it would be refreshing as heck to other world leaders, too.