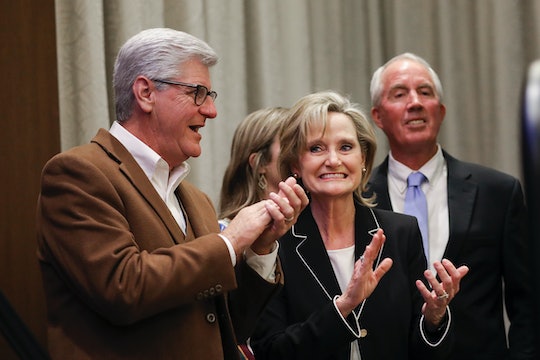 How Many States Have Passed A "Heartbeat Bill?" The Answer May Surprise You

Mississippi Gov. Phil Bryant signed a bill on Thursday that would make it even more difficult for pregnant women to get an abortion in a state that already only has one abortion clinic. The anti-abortion bill, taking effect in July, bans abortions after a doctor can detect a fetal heartbeat during an ultrasound. Mississippi is only the latest addition in a string of many states that have passed a “heartbeat bill.” So, how many states have passed a "heartbeat bill?"

Mississippi, which the Washington Post noted is the most male statehouse in the United States, is among three states in just as many weeks that have passed similar anti-abortion legislation. On Friday, the Georgia Senate approved House Bill 481, which is now on its way back to the House where legislators must approve the Senate’s changes. Gov. Brian Kemp is expected to sign the legislation if passed, according to the Atlanta Journal-Constitution. Kentucky Gov. Matt Bevin also signed an anti-abortion bill last week, which was swiftly blocked by a federal judge for its constitutionality just hours after, according to The New York Times.

Just this year, lawmakers in 11 states have introduced heartbeat bills, including Texas, Florida, Georgia, Ohio, and Mississippi, as noted by the Washington Post.

And in January, a judge found Iowa's so-called "heartbeat bill" unconstitutional, as the AP reported. Gov. Kim Reynolds had signed the bill into law last May.

Many lawmakers have been forthcoming in their intent to restrict women’s reproductive rights. According to Think Progress, Bryant said in a 2014 state of the state speech, "On this unfortunate anniversary of Roe v. Wade, my goal is to end abortion in Mississippi."

The refreshed restrictions on abortions have been dubbed "heartbeat" bills by advocates because they prohibit abortions after the detection of a fetal heartbeat, which is usually at six weeks of pregnancy. This is oftentimes before women and trans and non-binary people even know they are pregnant.

Pro-choice advocates are now pushing back against the resurgence in restrictive abortion laws. Hillary Schneller, staff attorney at the Center for Reproductive Rights, said, per The New York Times, "This ban is one of the most restrictive abortion bans signed into law, and we will take Mississippi to court to make sure it never takes effect."

The ACLU is gearing up to challenge the measures as well. "If the governor signs this bill into law we will see him in court," Sean J. Young from the ACLU of Georgia said, according to CBS 46. "The U.S. Supreme Court has been clear, a woman has a constitutional right to an abortion before the point of viability and there is not a single scientist or even politician who will assert that a 6-week-old embryo can survive outside of a uterus."

The AJC noted that American actress and advocate Alyssa Milano is also urging Hollywood film companies to boycott Georgia over the state Senate’s decision to pass the bill, which she said would "strip women of their bodily autonomy."

As the country gears up for yet another debate on reproductive rights in a nation where women continue to go underrepresented, the age-old question of when women will be able to make decisions about their own bodies still remains unanswered.

More Like This
This Map Illustrates Just How Many States Would Ban Abortion If Roe V. Wade Is Overturned
Here’s How To Fight For Abortion Rights
Taraji P. Henson Says “Guns Have More Rights Than A Woman” At The 2022 BET Awards
Obamas Issue Powerful Statements After Supreme Court Ends Roe v. Wade