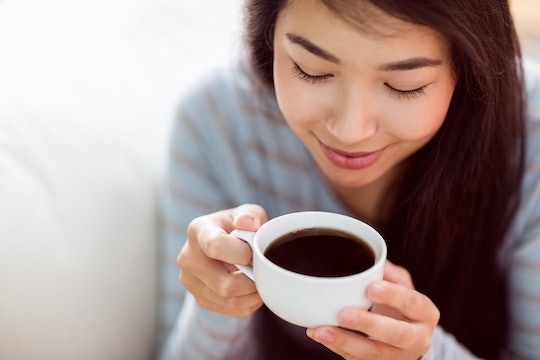 If You're Drinking This Much Coffee Per Day, A New Study Says It's Too Much

I know that desperately needing coffee to wake up in the morning has become a bit of a cliché, but I'm sorry to tell you it is also true. Many of us adults rely heavily on a cup of the hot, sweet nectar of the Gods to get us through the day. In fact, many of us might need more than one cup. Or two cups. Or even three cups to get us through. But how much coffee is too much? According to a new study, it looks like there could be an upper limit and I fear this is the bad news we've all been dreading.

Researchers from the University of South Australia recently decided to look at whether or not a person's health could be harmed by drinking too much coffee in a day. Coffee is, after all, one of the most commonly used stimulants in the world, according to the Atlanta Journal-Constitution. It's not exactly uncommon to consume one or two cups of coffee in the morning and then maybe even a cup or two in the afternoon for many people. But when does coffee consumption become harmful?

Elina Hyppönen, one of the study’s researchers, worked with other researchers to cull through health records of 347,077 people between the ages of 37 and 73 in the UK Biobank to come up with an answer, according to Science Daily.

The researchers published their findings in The American Journal of Clinical Nutrition, and while some of us might have been hoping there would be no limit to the amount of coffee we could drink, it appears that is incorrect. After analyzing the self-reported coffee consumption and health records in the UK Biobank, the researchers were able to find a link between a 22 percent increased risk in cardiovascular disease with people who regularly drank six cups of coffee or more in a day.

"In order to maintain a healthy heart and a healthy blood pressure, people must limit their coffees to fewer than six cups a day — based on our data six was the tipping point where caffeine started to negatively affect cardiovascular risk," Hyppönen explained in a statement, according to the Chicago Tribune.

So that's the bad news. But... here's the good news: Researchers who took part in this study found that people who drank one to two cups of coffee per day had a lower chance of cardiovascular disease than those who drank decaffeinated coffee or no coffee at all.

This finding appears to be in line with other studies that have found two cups of coffee per day has health benefits like reduced risk of Type 2 diabetes and can even help you live up to two years longer, according to CTV News.

At the end of the day, it looks like coffee in moderation is perfectly good for us. The study by the University of Southern Australia found that five cups or fewer a day is fine, depending on your own reaction (if you find yourself getting jittery, for instance, you might want to dial it back a hair).

So I guess we can all just keep sipping away at our coffee and not tearing out our own hair from caffeine withdrawal — this seems fine to me.

More Like This
Can The Baby Have That?
This Is What Experts Say About Eating Hot Dogs During Pregnancy
Delicious Juneteenth Recipes Your Whole Family Will Love
Bunmi Laditan Hopes There’s No Cooking in Heaven