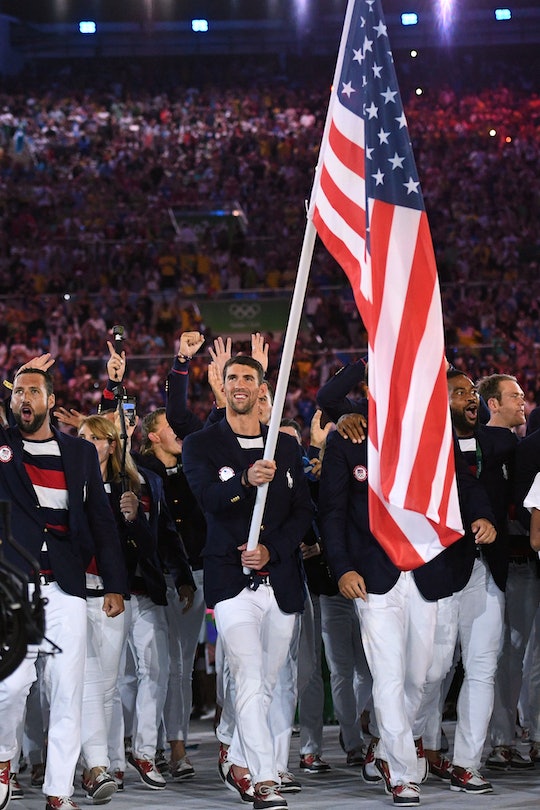 How Much Do The Opening Ceremony Flags Weigh? For Olympians, They're Apparently Weightless

For both viewers and athletes alike, the most tiring part of the Rio Olympics opening ceremony on Friday was, undoubtedly, the never-ending segment wherein athletes from each nation walked in a circle holding their country's flags — the Olympics tradition is formally known as the "Parade of Nations." It's impossible for one's mind to not wander to strange, fruitless questions while watching this parade: Are those outfits comfortable? Is it hot in Rio today? Did I leave the stove on? As these questions waft in and out of mind, one crystallizes with particular clarity: How much do the opening ceremony flags weight?

As it turns out, the flags appear to be light enough that their particular weight isn't of great concern, short of their lightness being a source of bragging rights for the athletes who carry them. Indeed, Great Britain tennis star Andy Murray, who was appointed to be his nation's flag bearer (the athlete out front, holding the largest flag), showed off his grit by holding the flag one-handed. This spectacle of athleticism was, in fact, a dare from Sir Chris Hoy, the renowned British cyclist who was Britain's flag bearer in the 2012 London Olympics.

In a show of true sportsmanship, Hoy publicly praised Murray's flag-bearing prowess by sending out a celebratory Tweet: "Nailed it," he wrote.

Meanwhile, on this side of the Atlantic, the United States flag bearer is receiving attention not for impressively hefting the weight of Old Glory, but for leaving the stadium the moment his flag-hefting duties have ended. Olympic swimmer Michael Phelps has been criticized because he is the first flag bearer in United States Olympics history to leave the stadium before the ceremony has ended.

As reported in USA Today, Phelps planned to be "whisked away by NBC staffers and driven back to the Olympic village" as soon as he was finished carrying the flag. This makes Phelps the first known flag bearer to leave before the ceremonies are complete, which is all the more interesting because Rio is the first Olympics opening ceremony Phelps has ever attended, despite this being his fifth Olympics, according to USA Today. It's not uncommon for athletes to skip the opening ceremonies if they're competing the following day.

Frankly, Phelps can do whatever he wants. As the most decorated Olympian of all time — he's won 22 medals — it really doesn't matter whether he holds a flag, drops a flag, twirls a flag, leaves early, or doesn't show up at all, so long as he's in the pool at the starting buzzer.