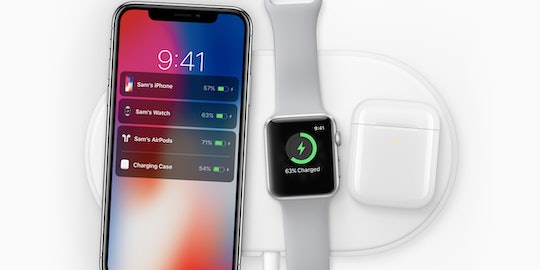 How Much Will Apple's New AirPower Charging Mat Cost?

The big Apple event on Tuesday left a lot of fans itching to get their hands on a whole bunch of fun new devices. And while the iPhone X may be getting the biggest hype, anyone who has ever gotten tangled up in too many chargers is bound to appreciate the simplicity of the wireless AirPower charging pad. But how much does the AirPower charger cost? Unlike some of the other items revealed at the launch, it's not available yet, so the price tag is anyone's guess. But if the costs of the other Apple gadgets on display are any indication, it's time to start saving up — pronto.

The AirPower charger, as shown in a sneak peek at the Steve Jobs Theater launch in Cupertino, is a charging pad that will be able to hold and charge multiple devices at once. That's right, no more trying to finagle the electrical outlet situation when your phone and your AirPods and your Apple Watch are all dying at the same time! Just plop up to three of your gadgets on the pad, and let the future magic do its thing. Of course, the Qi wireless charging technology standard that the AirPower will use has been around for a little while now, primarily with Samsung devices, but the AirPower will be employing the technology on a much larger scale.

I know, I know, it sounds great and looks pretty, and you would love to buy it right now. Unfortunately, Apple was a little vague on the details. The company announced that the AirPower would be available "next year," but that's about all fans have got to go on at the moment.

Still, when it comes to trying to figure out how just many dinners out and fancy cappuccinos you'll need to forfeit in order to make an AirPower purchase work with your 2018 budget, there are a couple of pieces of relevant information to consider.

For now, people who can't wait to get into the wireless charging game with their Apple devices can use the Belkin Boost Up Wireless Charging Pad, which will be available through Apple in the coming days and work with the latest iPhone models. That pad will cost $59.95, as listed on the Apple website, and it only charges one item at a time. (Pitiful, I say!) Another Apple-approved option that meets the Qi standard is the Mophie Wireless Charging Base, which will also retail at $59.95 and work on one iPhone at a time.

So it's pretty safe to guess that the AirPower will cost more than $59.95, since it will be able to charge up to three times the devices of the Belkin and the Mophie. Could it cost close to three times as much? You'd probably have to bribe an Apple employee to find out.

But Apple is certainly no stranger to convincing people to pay what might seem like exorbitant amounts of cash for buzzy gadgets. The iPhone X, Apple's biggest reveal on Tuesday, made headlines for its price. The phone has facial recognition technology, end-to-end screen, and no home button, and it starts at $999. That's... well, that's a lot of money. Still, people can't wait to buy it, and it will likely be extremely difficult to get your hands on one over the next few months.

No matter what Apple decides to end up charging for the AirPower, a lot of people are eager to buy the fancy accessory. For now, money-conscious fans will just have to keep waiting for a price tag.

Being patient may be no fun, of course. But from now until some undefined point in 2018, just whisper "Good things come to those who wait" whenever all your chargers get tangled together.