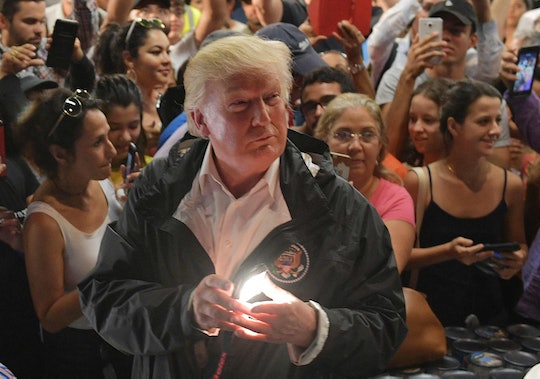 When U.S. citizens are still without power, clean water, and even shelter nearly two weeks after a catastrophic hurricane descended upon where they live, the last thing anyone should do is say that relief efforts are "throwing our budget a little out of whack," — and yet, that's exactly what President Donald Trump did on his visit to Puerto Rico on Tuesday. How much is Puerto Rico relief costing the United States? Compared to hurricane relief efforts in Florida and Texas, it's downright shameful that U.S. citizens who just happen to live 1,200 miles from the continental United States are getting such little support from the U.S. government.

For Trump to assert that helping American citizens is somehow breaking America's bank is downright insulting at best — and shows how fundamentally stupid Trump's understanding of the U.S. budget is at worst. Currently, the U.S. budget has $3.21 trillion in revenue, with another $3.65 trillion in spending, according to 2017 estimates. Trump campaigned on bringing down that $443 billion budget deficit, and it's something the GOP-controlled Congress is hoping its misguided tax reform plan can accomplish.

FEMA-approved relief grants don't account for the total amount of U.S. funds used to supplement relief efforts in Puerto Rico. On Tuesday, the White House announced it was sending to Congress a $29 billion disaster aid request to help the victims of Hurricanes Harvey, Irma, and Maria. But before you get ready to run a high five gauntlet down the halls of the West Wing, understand that $16 billion of that disaster aid request is just in debt forgiveness to the already debt-burdened National Flood Insurance Program. It's not as though the White House is suddenly dropping $29 billion into some hurricane relief checking account — like so much of the U.S. budget, it's a lot of playing a shell game with sums of money that are almost too big to comprehend.

Disaster aid request aside, what has been approved by FEMA to help Puerto Rico is hardly a drop in the U.S. budget bucket. To reiterate: FEMA has approved a measly $6.91 million in individual assistance compared to the $3.21 trillion federal budget. For Trump to say, "We've spent a lot of money in Puerto Rico" and that the money needed for Puerto Rico's months-long recovery is "throwing our budget out of whack" is just absurd.

On Tuesday, Puerto Rico Gov. Ricardo Rossello provided an updated death toll from Hurricane Maria. So far, at least 34 people have died in Puerto Rico when the Category 4 hurricane directly hit the island, almost double than what Rossello shared when asked by President Trump at the Muñiz Air Force Base in Carolina, Puerto Rico yesterday. In one breath, Trump simultaneously told Puerto Ricans — again, American citizens — that Hurricane Maria was not a "real catastrophe" compared to Hurricane Katrina, while telling them they should be "proud" that only 16 people died — as stated by Rossello at the time — instead of "literally thousands of people" in Katrina. Then Trump threw rolls of paper towels into a crowd like he was Puerto Rico's Kobe Bryant.