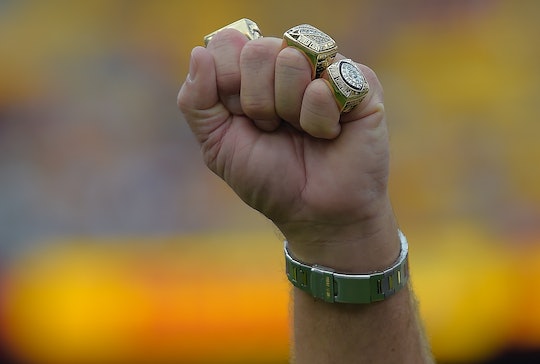 When the dust settles at Hard Rock Stadium in Miami, Florida, and Super Bowl LIV is declared officially over, one team will be named champions. But while history saw champions bestowed with a crown, the National Football League (NFL) inaugurates champions with a smaller circle of metal: a ring. But just how much could the 2020 Super Bowl ring cost? As you've probably guessed, this lavish piece of jewelry doesn't come cheap.

While there's no telling exactly how much this year's Super Bowl championship ring will cost until it has been made — it can't even be designed until either the San Francisco 49ers or the Kansas City Chiefs are declared the winner of tonight's game — I can say, with confidence, that its price will fall in somewhere in the tens of thousands of dollars range. Since their introduction to the game, Super Bowl rings have been designed by Jostens, Tiffany & Co., and Balfour. And over the years, their designs have gotten bolder and more bling heavy, as evidenced by Josten's catalog of more than NFL 30 rings.

The first Super Bowl ring ever made, which was awarded to the Green Bay Packers in 1967, featured a single diamond and just .46 ounces of gold, according to Bleacher Report. The sports news network reported that the first, modestly-designed Super Bowl ring was recently appraised at an estimated $20,419.

By contrast, according to ESPN, a ring designed for the New England Patriots in 2015 reportedly has 205 diamonds for a total of 4.85 carats. At $36,500 each, the rings were, at the time, thought to be both the biggest and most expensive Super Bowl Rings Jostens had ever produced. It has since been surpassed by the Super Bowl ring designed for the Philadelphia Eagles in 2018, which, according to CNN, featured 219 diamonds and 17 green sapphires in 10 karat white gold.

But while Super Bowl rings come with hefty price tags, it's not the players who pay for them. According to CNN, the NFL contributes roughly $5,000 per ring for a maximum total of 150 rings. Additional costs beyond that — and with the lavish, diamond-packed designs of recent years there are are definitely costs beyond that— are paid for by the franchise behind the winning team.

Unsurprisingly, the rings are not available for purchase by the general public. As they say, to the victor go the spoils.

More Like This
Viral TikTok Breaks Down How Beautifully Bluey Depicts One Character’s Infertility
The Summer I Turned Pretty Is A Beautiful Coming-Of-Age Story For Teens & Parents
Who Is Eleven's Mom On Stranger Things? Here’s What We Know...
Everything Families Need To Know About The Westminster Dog Show