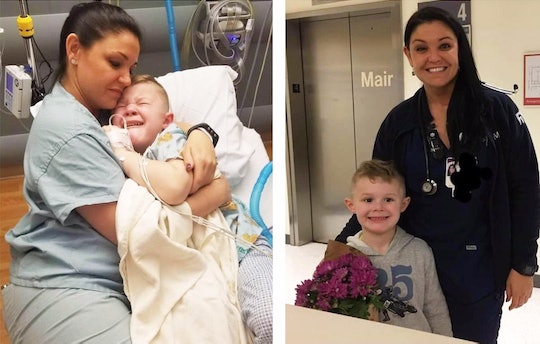 Surgery can be scary, especially when you're a kid. But, luckily, there are caring people everywhere. And a young boy named Slade Thompson learned that firsthand when he came to a Pennsylvania-area hospital to have his tonsils removed recently and met Nurse Annie Hager. And get ready to "awww," because how this nurse comforted the young boy after surgery will totally melt your heart and remind you of the goodness in the world.

The procedure was Slade's second of the year, and he was understandably anxious about the outcome, especially because his mom wasn't allowed to accompany him into the operating room, according to local ABC News affiliate WNEP. But the 5-year-old boy quickly befriended Hager, a nurse at UPMC Hospital, and she was there to comfort him through it all.

"When I told him Mom couldn't be there, he asked if I would snuggle him," Hager told WNEP — and she happily obliged. The adorable act of kindness was fortunately caught on camera, and has since gone viral.

With that, Slade and his mom, Layla Thompson's, fears subsided. He made it through the surgery just fine, according to 11 Alive, and he and his mom came out with a renewed faith in humanity.

Thompson admitted that she was as nervous as her son before the procedure, according to Fox 5, but when she saw how Hager and the other nurses rallied around her son all that was gone. "You want someone to treat your child the way you would treat them, you know, so whenever I turned the corner and saw them, I looked at my fiance and we both went, 'Aww!' We both started getting a little teary-eyed," she recalled to WNEP.

The photo was shared on Facebook by the hospital, and has been liked and shared thousands of times. UPMC Hospital touted a commitment by all its nurses to "making sure our patients are calm and comfortable." The facility also included a photo of Slade and Nurse Hager after he returned a second time for a checkup. And the best? He brought flowers for his new friend.

"During Nurses Week, we thank our nurses for taking time to make personal connections with patients," UPMC wrote on Facebook. "Annie's connection with Slade was so real that he brought her flowers at his follow up appointment."

Ah! My heart! I'm not alone; many, many commenters were extremely moved by the photos and the story. In fact, UPMC's Facebook comments were flooded with praises for Hager, calling her "a great nurse for all ages." Others said Slade's story "brought tears to me."

"A heart warming story, [thank you] for sharing," one commenter wrote. "Nurses are the best." Another wrote, "That's awesome Great job nurse Annie."

Hager could have easily stuck to just doing her job, but she decided to go above and beyond to comfort Slade in his time of need. She deserves every ounce of praise she's received for her simple act of kindness. Hospitals are scary places for little ones, but if more people like Hager were on the job, there'd be much less to worry about when bringing kids in for procedures — big and small. Hospital employees have tough jobs, and their kindness does not go without recognition.

More Like This
The Covid Vaccine For Kids Under 5 Has Been Sent To The FDA For Review
Way Too Many Parents Have Zero Plans to Talk About Sex With Their Kids
Reddit Is Not Impressed With Dad Who Hid Neighbor's Gnome Because It Scared His Kid
'Squid Game' Is Coming Back For Season 2 On Netflix: Here’s What Parents Need To Know