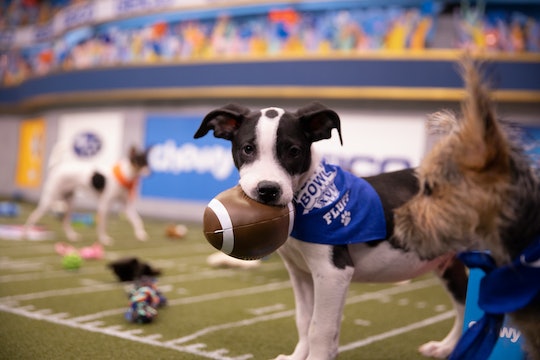 Puppy Bowl XVI Give You Puppy Fever? Here's How To Give Those Pooches A Furever Home

The most important sporting event of the year airs today, and no, I'm not talking the Super Bowl. Animal Planet will air its 16th annual canine competition of cuteness on Sunday and, like many, you're likely wondering how to adopt the sweet puppies from the 2020 Puppy Bowl.

Well, I've got good news and I've got bad news for you. While all of the puppies participating in the bowl are shelter dogs in search of a fur-ever home, it may be too late to snatch them up. Fortunately — and unfortunately, if you think about it — there are plenty of pups waiting at the participating shelters to join your families and adopting those dogs couldn't be easier.

The Puppy Bowl has been a television sensation since it first aired in 2005, which isn't all that surprising. Placing adorable, adoptable pups on a miniature football field to compete for silly prizes — the Chewy "Lombarky" trophy, you guys — is a recipe for television gold if you ask me. And this year's competition is set to have more shelter pups than ever before: 96 puppies from 61 shelters across North America make up Team Ruff and Team Fluff, the competing teams in this year's bowl.

A heartwarming 100% of past participating puppies found their fur-ever homes by the end of the competition, and this year will likely be no exception. But if you're hoping to get your hands on one of the cute competitors, it might be too late. As longtime Puppy Bowl referee Dan Schachner explained in a 2015 Reddit Ask Me Anything session, the Puppy Bowl is filmed three months in advance and most of the animals are adopted long before it even airs.

But if there are any remaining pups up for adoption, they go fast. "Literally, it takes MINUTES," Schachner wrote. "As soon as people start watching Puppy Bowl, they can go to AnimalPlanet.com and look up the puppy profile, which will connect you with the shelter or rescue center that has them! And you can be sure that within 5 minutes — you have to act quickly." For example, an adorable pup named Floofer on Team Fluff for Puppy Bowl XVI from Danbury Animal Welfare Society in Connecticut is not currently on the shelter's website, which presumably means he's already been adopted.

But Schachner went on to add that the animals shown aren't the only ones looking for homes. "So what we like to say is 'Don't worry if the dog or cat you fell in love with is no longer available — because they are part of litters, and they will probably have brothers or sisters that you can adopt, even if that one star puppy isn't there!'"

Puppy Bowl XVI will showcase a handful of players with special needs that are also looking for homes. These cuties include Ferris, a three-legged Labrador Retriever mix; two hearing impaired pups (Kismet, a Great Dane, and Paprika, a Chihuahua mix); Filbert, a blind and hearing impaired Shetland Sheepdog mix; and Rooster, an American Staffordshire Terrier/Bulldog mix with a cleft palate.

So, the gist here is if you see a puppy or two that completely steals your heart, it's worth checking to see if he or she is still up for grabs. And, if not, they could have a sibling waiting for a home as well. But even if you're not in the market for a new furry friend — which is weird, but whatever — there's still the entire two hours of puppies playing to fill your heart with joy.

This year's Puppy Bowl begins with its pre-game how on Animal Planet at 2 p.m. ET and the game itself airing at 3 p.m. ET.

More Like This
Everything Families Need To Know About The Westminster Dog Show
Viral TikTok Breaks Down How Beautifully Bluey Depicts One Character’s Infertility
The Summer I Turned Pretty Is A Beautiful Coming-Of-Age Story For Teens & Parents
Who Is Eleven's Mom On Stranger Things? Here’s What We Know...