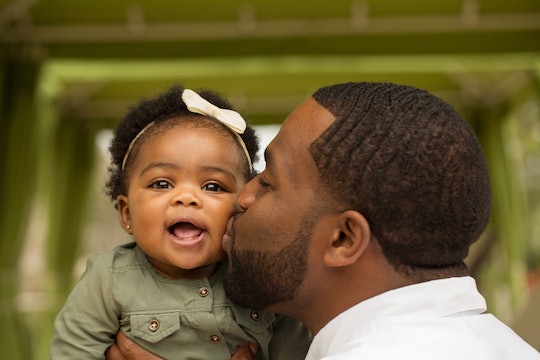 In an ideal world, there would be mandatory paid leave for both mothers and fathers. But, as it stands, this is not the case. But one company is trying to bridge the gap in a pretty special way, one dad at a time. If this sounds like something you want in on, here's how to apply for Dove's paternity leave fund, because babies need their fathers in those early days, too.

Dove Men+Care is tackling the issue of paid paternity leave, and it is an issue. A study conducted in 2018 by Dove concluded that half of all dads believe they should take leave, but less than one in five men in the U.S. have access to any paid paternity leave at all. What's more, those who do have it don't believe they are able to use the entire allotted period of time to be with their child. In response to these concerning findings, the company partnered with dad Alexis Ohanian to launch the Pledge for Paternity Leave and Paternity Leave Fund earlier this month. Together, the two will give out $1 million as part of its paternity leave campaign.

Over the course of two years, Dove and Ohanian will hand out $5,000 grants to 200 fathers who receive less than 10 days of paid leave from their employers, according to Working Mother. In order to qualify, dads must be 18 years of age or older, be legal residents of one of the 50 United States (or D.C.), and work for company with no more than 10 days of paid paternity leave. They can be new dads — with babies younger than 8-months-old — or be expecting a child through pregnancy or adoption.

Online applications are currently open and will remain open until the end of 2020, as Motherly reported. Interested dads will have to take the Pledge for Paternity Leave and answer some questions about fatherhood. To apply, visit the Dove Men+Care’s website. Applicants will be judged on categories like “originality/creativity” and “passion/enthusiasm,” according to CNN.

This is an issue of great importance to the organization. Nick Soukas, VP of Skin Cleansing and Baby Care for Dove’s parent company, Unilever, explained in a press release why the company decided to tackle paid paternity leave:

Ohanian's involvement in the campaign is far from surprising. Along with being famous for co-founding a little website called Reddit, Ohanian is also known for his candid discussions on raising his young daughter with wife and overall bad*ss mama Serena Williams. In the same press release, Ohanian explained how his own decision to take time off of work to be with the baby impacted his decision to join in on the Pledge for Paternity Leave and Paternity Leave Fund:

I saw firsthand the importance of taking paternity leave and being there for my family during a critical time in our lives. No dad should have to sacrifice taking leave, and I've been very public about taking mine in an effort to show other men that you can still be an ambitious businessperson while also taking time for your family. And it's not just fathers who reap the benefits — it's in the best interest of families, workplaces and communities to support dads in taking leave.

While the opinions of Unilever and Ohanian are unfortunately not the norm of most companies in the U.S., their campaign sheds important light on a problems affecting parents nationwide. Hopefully more businesses see that light and follow suit.