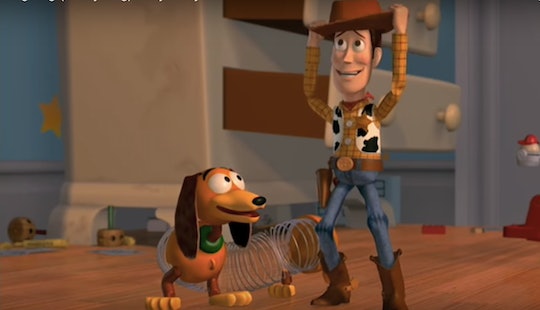 If you were savvy enough to plan ahead to be one of the first visitors to Toy Story Land — a new Walt Disney World parks attraction that opened in in Hollywood Studios behind the already existing Toy Story Midway Mania on June 30 — then you'll also be first in line for some adorable Toy Story-themed swag. One item inspired by the one and only Zig Zag is sure to be a bestseller, if social media posts are any indication. So how can you get the Slinky Dog ears you've been seeing all over Instagram and Twitter if you aren't able to make it all the way to the new land?

Well, you probably should try to go to the new land, because it looks very fun. According to the Disney Parks blog, guests will be able to ride the "Slinky Dog Dash" rollercoaster, get dizzy on the "Alien Swirling Saucers," and take a stroll to the already existing "Toy Story Mania" game box, which has been expanded to include more 3D games. After you wear everyone out, you can head to Woody's Lunch Box to get some lunch and an old-fashioned milkshake or soda float. Then, of course, you have to hit up the gift shop for these Slinky Dog ears.

The ears are inspired by the iconic Mickey Mouse ears headbands, but instead of ears, it's just Zig Zag's face with his coiled wire laying over your head. Unfortunately, right now, it looks like they're only available at the actual, physical gift shop in the park as they aren't on the website just yet. That could change, eventually, but for now, you and the family will have to head to Orlando, Florida.

Of course, you can always get crafty. Like, literally. There are quite a few sellers on websites like Etsy where people are selling their own versions of the Slinky Dog ears. If you have neighbors or friends heading down to the park this year, you could also always beg them to bring you back a pair in their suitcase. Or give them a pre-paid and addressed envelope for them to mail them to you before they head out so they don't waste precious carry-on space. Hey, these ears are adorable, so you should definitely do whatever you can to get a pair.

Steven Miller, who blogs about the merch for DisneyParks.com told ABC News all about the good souvenirs you can buy at the new land. He explained the motivation behind the new ears, saying, according to ABC News, "Our headbands have been so popular at Disney Parks. We thought what a fun twist for the playfulness that is Toy Story Land."

Phil Holmes, vice president of Hollywood Studios, told The Orlando Sentimental the same thing. "The ear bands have been very popular. … Think about this as the Slinky Dog’s version of that. You’ve got this Slinky Dog that bounces around and has kind of the expression and look that comes right out of the movie," he told the publication. Everything about the new land is original. Holmes added, according to The Orlando Sentimental, "The creative team on the merchandise side has outdone themselves."

Good merchandise is just one way the Disney teams make the park a totally immersive experience for the whole family. Holmes went on to tell the publication, "Our guests really do enjoy and expect that they are not just coming into the park or into a land to maybe experience one of the great attractions or shows. They really do love the idea of being immersed when they’re having a food and beverage moment.”

The whole idea of Toy Story Land is that visitors are "shrunk" down to the size of the toys in Andy's backyard. Creative Director Roger Gould, who designs all the Walt Disney World parks and comes up with the concepts, told Digital Spy:

So [the park] is Andy's backyard. All the toys are together. He's been playing with everything from building blocks and Lincoln Logs to Tinker Toys and his coaster kit. He's put them all together with his favorite Woody's lunchbox and green army men, and he's having a blast.

Matt Kabral reported for Digital Spy, "For accuracy's sake, this means larger toys like Woody and the gang tower over guests as they explore the park. The fan-favorite sheriff, who stands at Toy Story Land's entrance, is 20 feet tall, while Slinky Dog serves as a roller-coaster vehicle seating 18 guests. Buzz, Jesse, and Rex also loom large, as does the iconic Pixar bouncy ball, which dwarfs fans eager to snap a selfie in front of it."

The new expansion sounds like so much fun. Just make sure you grab a pair of those Slinky Dog ears before getting those selfies in front of your fave toys.

More Like This
Viral TikTok Breaks Down How Beautifully Bluey Depicts One Character’s Infertility
Sox The Cat Is The Companion We Never Knew Buzz Lightyear Needed
'Squid Game' Is Coming Back For Season 2 On Netflix: Here’s What Parents Need To Know
This Reddit Post About Two Sisters In A Fight Over Breast Milk Is Complicated & So Sad