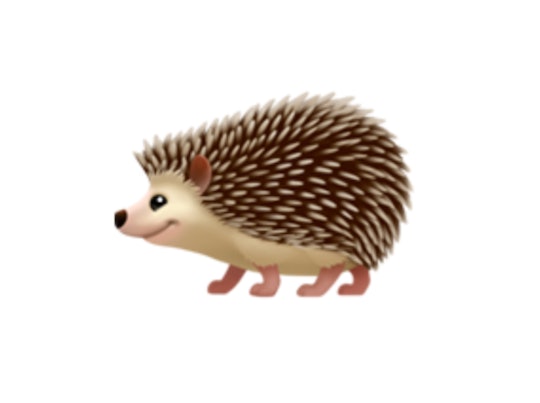 The 70 New Emoji Are Here, & You *Need* This Hedgehog ASAP

By now, you may have heard about Apple's updated emoji list, but after months of talk, the wait is finally over. Here's how to get the 70 new emoji, including the much-hyped gender-neutral person, the woman in the hijab, and much, much more. I feel like the new animal emojis haven't really been discussed enough, and they really need to be, because that hedgehog is probably the most important technological advancement of the decade. Marvel at its cuteness! There is no wrong time to send the hedgehog, so let's get started.

If you're an iPhone user, chances are you recently received a notification to update your software. If you've done that, you're good to go. Otherwise, back up your phone to iCloud, then go to Settings > General > Software Update, and tap Download and Install. You might receive a message asking to temporarily remove apps to make space for the iOS 11.1 update; if that's the case, choose Continue, and they'll be reinstalled after your update. If you don't feel like dealing with it right now, you can choose Install Tonight and your software will be updated while you sleep. But then, of course, you'll have to suffer through another hedgehog-less day, and who wants that?

If you're in a dead zone without WiFi and can't freakin' wait for that hedgehog (I feel you), Apple has one more way to update to iOS 11.1. If you have iTunes on your computer, you can connect your phone to it, open iTunes, select your device, click Summary, and then Check for Update. Look at you, you little hacker! Pretend you're downloading schematics for a new superweapon, and you've only got 10 minutes before the security guard passes by on his rounds. The fate of the world depends on you! And also hedgehogs!

Once you've gotten that sweet, sweet update, relax and take some time getting to know your new cartoon friends. You've got your elves, your zombies, your mustachioed men sitting in a steam room... What are you using that emoji for? I don't care; that's none of my business. There's also a Chinese takeout container and a broccoli floret, so now you can finally ask your friend to order you the spicy chicken in garlic sauce with no broccoli, or extra broccoli, without resorting to actual words. Unfortunately, there's still no word on a water chestnut emoji, but if your friend doesn't know your stance on those, I hate to tell you, that's no friend.

One thing to keep in mind: not everybody will be able to see the bearded men and rock climbers that you're sending them. They'll only appear on devices that can read Unicode 10.0, meaning iPhones running iOS 11.1, or Android phones on version 8.0, also known as Oreo. And just to confuse matters further, different operating systems all have their own interpretations of emojis (think of them as the same letter, but different fonts) so the Samsung Galaxy user and Google Pixel user on your group text will see completely different emojis than the ones you're sending.

Most emoji interpretations are similar enough, but it can get a little confusing, gender-wise. Many emoji groups come in three different styles: Person, Man, and Woman. The default gender is up to your operating system, so when you send a generic zombie from an iPhone to an Android phone, you'll see a male zombie, but they'll see a female one. And curiously (progressively?), Apple has decided that the default gender for merperson is male, while Android disagrees. No big deal, I guess, since they're fictional anyway, but please, be careful who you send a cheeseburger to, because the cheese placement debate is very real, and you don't need that kind of drama in your life.